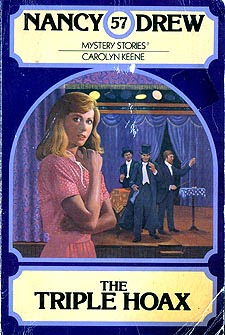 So now that we've briefly discussed the classic Nancy Drew hardcovers and some of the various editions of those books and related spin-offs including book club, library and foreign editions, what other kinds of Nancy Drew books can you collect besides today's modern spinoffs?

Did the Nancy Drew series end with book #56, The Thirteenth Pearl? No! It actually continued through book #175, published in 2003 before the Nancy Drew Mystery Stories series was finally discontinued. You can check out the section at my website on these paperbacks here and a handy list of titles. 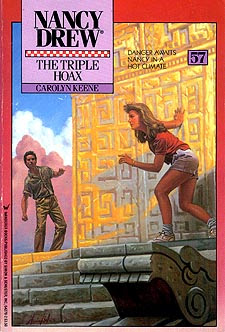 There are some collectors and fans who either aren't aware of the more modern paperbacks or are just not that familiar with them. And, there are some who just don't recognize them and only prefer the first 56. And that's OK, not everyone likes a more modern Nancy. However, for those who do, it opens the door to lots of collecting possibilities and more stories to read, which in my book is a good thing!  Todd H. Latoski has a running series where he reads and reviews them in order that we publish in The Sleuth, our Nancy Drew/series book zine. Before we jump into books 57-175, I'll briefly drop in a little behind the scenes history - and this historical background will be the topic of a future 31 Days posting, FYI. There was a publisher switch which led to the paperback format. The Stratemeyer Syndicate, which produced all these books, had a contract with publisher Grosset & Dunlap (now Penguin Random House) and G&D published the first 56. The Syndicate decided to switch publishers to Simon & Schuster and book #57, The Triple Hoax, was published by S&S in 1979. G&D objected, to put it mildly. A trial resulted between the parties in 1980. The ultimate end result of the trial was that G&D would continue to reprint the first 56 and S&S would publish all new stories. S&S published these in paperback. Except, there were hardcover editions with dust jackets of 56-78 that could also be purchased. Some collectors were buying these as they came out. Some were used in libraries, so it's great to find them more minty and unused without all the usual library markings. There are also other library bound versions of these books that one can find. And foreign editions. 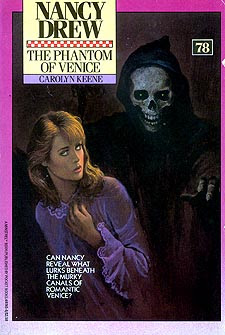 The Syndicate was still involved in the production of the paperback Nancy Drew books until the Syndicate was purchased by Simon & Schuster in 1984. The imprint at the publisher was Wanderer, so fans refer to books 57-78 as the Wanderers and often cite these as the best of the post-56 books. I grew up reading these and have a fondness for them and the cover art and illustrations. One of the most celebrated artists of this time period is artist Ruth Sanderson and some of our collecting circle are lucky to own the original art - especially collector Jim McNamara who is a prolific collector of Ruth's art including the first one she illustrated, The Triple Hoax. The mysteries in these books tend to be more like the classic 56 to a degree, especially early on, which is another reason fans rate these highly.

There were spinoffs and special editions including some hardcovers with dust jackets too during the Wanderer era and even Nancy and the Hardy Boys teamed up - but more about all those in a future 31 Days blog. 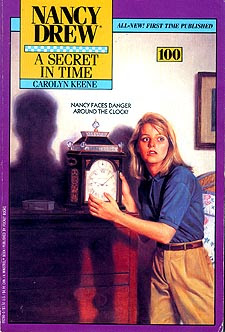 There are also different cover art for books 57-78 - each went through different imprints or was updated. Over time, S&S often updated the look and style of the covers as well as the cover models to keep Nancy looking relevant to young readers.

Books 79-175 are often referred to by fans as the Digests and there were various imprints - after Wanderer, there was Minstrel and then Aladdin. #100, A Secret in Time, was billed as a mystery that tied back to mystery #1, The Secret of the Old Clock, and I'll let you read it and be the judge of that tie-in. The Nancy Drew Mystery Stories series was discontinued when S&S decided to revamp Nancy Drew into Girl Detective Nancy Drew - a more bumbling "real" heroine who would often forget to put gas in her car or lose her car keys--more on that series in a future #31 days posting! A select few of the books in the 79-175 range were also issued with new cover art and then at one point some were given a new cover art with a "silhouette" design in the early 2000s. Nancy's look and the style of the covers changed throughout these books being published too as S&S often revamped the look to stay relevant or try and drive sales. 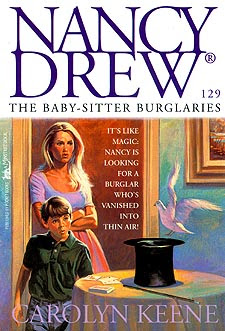 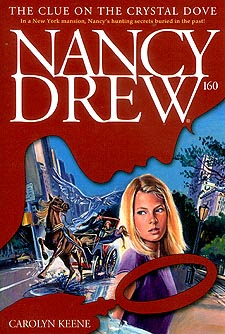 If you want to try the paperbacks, my suggestion is to start with the Wanderers. You can find books 57-64 in the yellow spine flashlight hardcover format as Penguin licensed them and published them a few years back - these are now out of print too, but you can find them used at sites like eBay/etc. Paperbacks can be found there or out in the wild. They can be downloaded at Amazon as eBooks too if you prefer that or can't find them in the wild or online.

In the comments, let me know, do you collect the books post-56? Do you only do the Wanderer books or do you collect all of them through #175? Has anyone read all of the paperbacks 57-175? What are your thoughts on the paperbacks? Let us know, what's your favorite book in the 57-175 range? Favorite cover art or illustrator? Tying into the recent Nancy Drew Foreign Editions blog, does anyone collect the foreign editions of these books? Who owns cover art to these books? 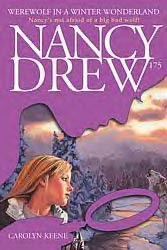