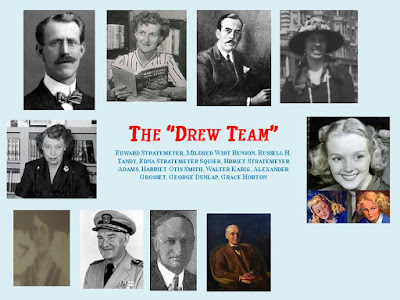 Nancy Drew - History Behind the Mystery

Today's brief overview posting is a reprint of sorts - most of this posting appeared here at this blog in 2015 during the 85th anniversary of Nancy Drew and the year Nancy Drew Sleuths hosted 3 mini conventions in three historic locations celebrating the history behind Nancy Drew and The Stratemeyer Syndicate. I spoke briefly on this content at the Maplewood Public Library during our convention in NJ in 2015 when we put on a library program there to celebrate The Stratemeyer Syndicate and Nancy Drew and donated a full set of brand new classic Nancy Drew books to the library. This is a brief post about these individuals, you can learn more at my website and check out my source page at my website for books that go more in-depth into some of these people and the history behind Nancy Drew.


She's solved mysteries so baffling that the River Heights police force couldn't ever solve. She's traveled far and wide to places like Turkey, Peru, Kenya and Charlottesville, VA. She's been knocked unconscious numerous times. Chloroformed. Kidnapped. Threatened with rocks, warning notes, telegrams and menacing animals. Strangled, tortured, and impersonated. Nothing foils Nancy Drew for too long, even the sometime annoying antics of chums Bess and George the fraidy-foodie and the tomboy-judo "master". She's even weathered the marriage and disappearance of pal Helen Corning, her father nearly being in the devious clutches of that sly Marty King, and numerous Emerson dances and chats about football and insurance sales with her "special friend" Ned Nickerson. With nary a retort at unruly suspects, grace under fire, and often a wan smile after coming to from being knocked out, she always got back in the saddle...er...roadster and eventually saved the day and rounded up all the dastardly villains for the police. All in a day's or vacation's work... To some, this might seem like perfection, but to most, we wouldn't have had it any other way. So, I say cloche hats off to Mystery's IT Girl and may Nancy Drew have many more mysteries to solve in her future!

When Nancy Drew debuted in 1930, she truly was in many respects a trailblazer of series heroines and by the end of the year, sales were going very well and steadily grew--by the first few books, she was quite a success if you go by sales figures in the New York Public Library. Considering the time period was during the Great Depression when many series went out of print and faltered, just what was it about Nancy Drew that helped her weather this dreary economic time and prepare her for the war years to come and all the paper shortages which also caused various series to take hits?

Before she became Mystery's IT Girl, there was the "Dream Team" or "Drew Team" who guaranteed her success in life, as she morphed from "Stella Strong" to "Nan Drew" to "Nancy Drew" and then got right down to business solving mysteries in her first case, The Secret of the Old Clock. Without this dreamy "Drew Team," who knows what fate might have had in store for generations of readers, why Nancy Drew Sleuths might be the "Elsie Dinsmore Sleuths" and that would be, frankly, just too namby pamby for words!

The "Drew" Team, who helped create and produce Nancy Drew and who made her the success she would become, is who we owe a hearty thanks to, for without them, I don't think Nancy Drew would be the pop culture icon that she is today. Let's take a moment and reflect on who helped make Nancy Drew such a success in her early 1930s years, which guaranteed a foundation that would transcend to her still today, modern-day sleuthing.

Inventor of Nancy Drew. He brought to the table years of experience at capitalizing on very popular themes with young people as he wrote and  produced many popular series like the Rover Boys, Ted Scott, Tom Swift, the Bobbsey Twins and the newer Hardy Boys series which debuted 3 years before Nancy Drew in 1927. He produced the outlines for the first four books and edited on these. He also knew that his current Ruth Fielding ghostwriter, Mildred A. Wirt, was just the right person to handle the treatment of the Nancy Drew series and that with a little work and adjustment, she'd turn out a fine story.


Iowa native, Mildred Wirt Benson, having grown up with a doting father and lots of freedom like Nancy Drew, gave life to Nancy Drew with a bright, bold fresh characterization and a snappy visualization of mid-western River Heights. She had been writing since she was a child and had chanced up on an advertisement Stratemeyer placed in a trade publication - The Editor - it led to her ghosting the Ruth Fielding series. She had always preferred boys' series books growing up as they were more exciting and adventurous. She always felt that girls could do the same things boys could, and therefore, so could Nancy. She wrote books 1-7, 11-25, and 30. I am currently writing a biography about Benson.

Navy man and Syndicate ghost - when he stepped in to write #8 Nancy's Mysterious Letter, it could have made or broken Nancy Drew. His amicable style of writing with overtones of humor and drama--a dramedy of thrills, that helped bring alive Ned Nickerson's world at Emerson College, handle a family drama and darker twisted set of villains in The Sign of the Twisted Candles and the dastardly doings in The Password to Larkspur Lane, were such that no great continuity problems are to be found between Wirt and Karig's Nancys--and the mysteries all flowed well together.

Stratemeyer's very capable assistant, Smith, who assisted Edward on volumes 1-3, was heavily involved on volume 4 during Stratemeyer's illness, is often unknown and uncredited for all her hard work at the Syndicate. It was Smith who wrote the outline for book 5, The Secret at Shadow Ranch, and who most likely created the mostly beloved characters of Bess and George. It was also through her efficient management, that once Stratemeyer passed away on May 10, 1930, that the publishing of Syndicate series didn't grind to a halt and the transition to Stratemeyer's daughters would be reasonably successful. 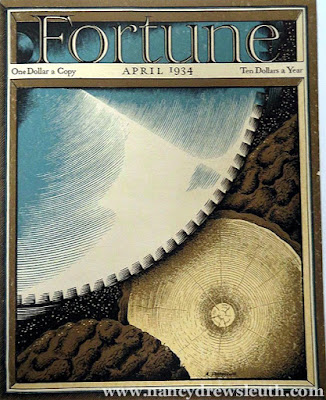 It shouldn't go without being mentioned, that by 1934 and through the Great Depression and when many series came and went, Nancy Drew series had became a hit - and this was recognized in an article in the April 1934 issue of Fortune Magazine - an Ayers Brinser profile on Stratemeyer, "For It Was Indeed He". A famous quote from this article is this one - "As oil had it's Rockefeller, literature had its Stratemeyer." Brinser wrote of the Nancy Drew series, "Nancy is the greatest phenomenon among all the fifty-centers. She is a best seller." What Edward Stratemeyer helped create would go on today to still be a very long running popular series still in print and new books being published and a character that has resonated with millions of fans over the years. I think Edward would be most proud of that legacy and that his own daughters continued the business for many years after his death.

Edna's huge contribution to Nancy Drew's early success is frankly often forgotten and little is mentioned about her in the mainstream. It was Edna who plotted and wrote the outlines for most of the early Nancy Drew books after she and her sister Harriet took over the Syndicate fall of 1930. Her interest in mysticism and spiritualism inspired some interesting plots and characters too. Previous to her, as noted above, books 1-5 were handled by her father Edward and then his assistant Harriet Otis Smith. Once the sisters took over running The Syndicate, until 1940, Edna handled most of the Nancy Drew outlines/editing with the exception of four that her sister Harriet did. Edna plotted books 6, 7, 8, 11, 12, 13, 14, 16, 18 before she left the Syndicate to move to Florida in the early 1940s. It was Edna, who truly had an influence on Nancy's character during the early years on the creative side of things along with Wirt. She later said to her sister Harriet about Wirt, "Her style made the Nancys!"

Harriet, like her sister Edna, knew the Syndicate must go on after they couldn't find a suitable buyer - Great Depression and all - but her function for the early Nancy Drews was mostly as editor. She did outline 2 of ghostwriter Walter Karig's books--books 9 and 10 and then also outlines for books 15 and 17 before taking over with book 19 after Edna left in the 1940s. It was Harriet's outlines that especially became voluminous by the 1940s and it was Harriet who got Nancy through the war years and other trials and tribulations in the years after that. By the 1950s, she eventually began writing the books after the ghostwriting was brought in-house instead of being farmed out to other ghostwriters. Harriet's time with Nancy spanned generations, a testament to her dedication to her father's business and his work. She oversaw the revisions process for the first 34 books, and weathered the storm of transitioning from one long term publishing relationship with Grosset & Dunlap to a new publisher in Simon & Schuster and a stressful courtroom battle over that. Her ghost is said to haunt her NJ farm today, where she outlined and wrote some of her Nancy Drew books.

Commercial illustrator, Russell H. Tandy, won out for the job of bringing Nancy Drew to life over fellow illustrator Frank Townsend, when Edward sent samples of both Townsend and Tandy's work to Grosset & Dunlap. Tandy was a master at series illustration and was adept at giving Nancy Drew a very sophisticated style with boldness and lovely expressions. He also tended to use very patriotic colors like red, white and blue by the 1940s too, during the war years. Nancy Drew may have been 18, but she appeared very mature and capable--even a bit mysterious, as a plucky sleuth should be. He illustrated covers and internal illustrations through the late 1940s. His covers, almost like cliffhangers unto themselves, would have led kids to judge the books very well indeed by their appealing, almost beckoning scenes.

She may have grown up on Horton Ice Cream, but her figure, like Nancy's, was just the look to bring Nancy Drew alive on the cover of the Nancy Drew books. Her up-to-date blonde all-American looks were just what Edward Stratemeyer had stated Nancy Drew to be, on the outline for The Secret of the Old Clock, and she was a match made in literary dreams. She would go on to be Tandy's muse for the duration of his time working on the series.

A powerhouse publisher compared to smaller publishers, Grosset & Dunlap must be credited too, with the publishing end of the deal for it was their very aggressive and well funded sales force whose distribution was key to ensuring that Nancy Drew might be found in every corner of the US, certainly eventually as sales and print runs began to grow great guns even that first year of publication! They also possibly chose the name "Nan Drew" from Stratemeyer's list of character names and lengthened it to Nancy Drew - a name that will forever remain infamous and our Mystery's IT Girl!
Posted by Jenn Fisher at 2:45 PM