Frankie Thomas aka "Ted" Nickerson Has Passed Away 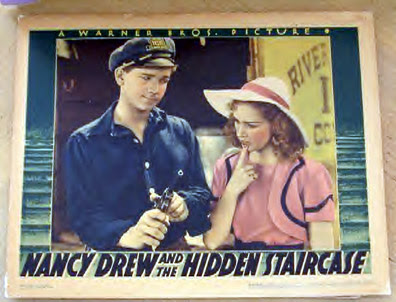 Frankie Thomas, who played "Ted Nickerson" in four 1930s Nancy Drew movies, Nancy Drew...Detective, Nancy Drew, Reporter, Nancy Drew, Troubleshooter and Nancy Drew and the Hidden Staircase, passed away last Thursday, May 11, 2006. While Frankie starred in quite a few movies and on Broadway, on TV as Tom Corbett, Space Cadet, and later in life became a mystery writer, I wanted to note a few memorable Nancy Drew film related moments.

“Duped again!” Poor “Ted” Nickerson was always at the mercy of scheming Nancy Drew in the Nancy Drew movies. The basic premise of each movie was that something mysterious happened and Nancy got involved. Nancy drug Ted into her sleuthing schemes–often bribing or manipulating him. Carson Drew told Nancy to stay out of it. Captain Tweedy did not take Nancy very seriously. Nancy and Ted got involved in a daring plot regardless of Carson’s orders to stay out of it, and they ended up getting caught. In the end, Carson Drew and the police rushed to Nancy and Ted’s rescue. (He was Ted instead of Ned because the filmmakers thought the name Ned was too old-fashioned.) 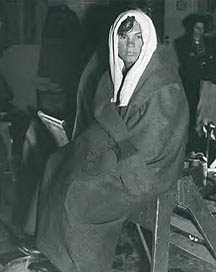 In Detective, Ted had to dress up as a nurse to help Nancy sneak into a sanitarium. Other ruses that Nancy talked Ted into included posing as a reporter and then pretending to be boxer One-Round Loogan in Reporter. (Shown in a black and white still.) Ted did more than his fair share of the work and often ended up in trouble due to it.

In Hidden Staircase, Nancy made Ted, who worked for an ice company at the time, write a fake suicide note for which he got arrested at the movie’s end. Ted borrowed a gun from his uncle so Nancy could run a test, and left a note with it, “Pest, I’ve gone to work. Don’t bother me today on account of I was docked for stalling around with you yesterday. P.S. Don’t blow your head off.” Not to be put off by this note, Nancy pretended to be a “Mrs. Brown” ordering ice and had Ted deliver it into rural location. She used the ruse to get Ted to fire the gun. He said, “Someday I’m going to be psychoanalyzed to find out why I’m such a dope.”

Ted fired the gun and discovered the sign he hit said no shooting, sirens were heard and Nancy drove off leaving Ted to get in trouble. Later, Nancy threatened to turn Ted into his employer for goofing off on the job so he’d help her do some investigating and he ended up having to spend the night in the Turnbull mansion to take a picture of the “ghost.” In the night, the “ghost” stole Ted’s clothes so he had to dress up in women’s clothing and got arrested. Ted was the classic comedy straight man to Nancy Drew.

A clumsy character, Ted fell over ladder causing a pigeon to escape, fell over containers causing Nancy to lose site of a suspect and ran from a goon at a sanitarium and fell over in Detective. In Trouble Shooter, Ted ran to see about a nearby fire–right through lattice work off a porch and later got caught up in a rope and then fell on his head when Nancy cut through rope. As boxer One-Round Loogan, he flailed around the boxing ring and ended up knocked out in Reporter. In Hidden Staircase, Ted fell down hill running with his pants down and later while trying to stop Nancy from breaking into the Turnbull mansion, he fell through a window and said, “I’m going to give myself up.”

He made us laugh!

(Look for a more indepth article in the October 2006 issue of The Sleuth! Subscribe here: http://www.ndsleuths.com/thesleuth.html )

The newly relaunched former Nancy Drew Notebooks are now Nancy Drew and the Clue Crew. The first two books are now out in some areas. There is a fun "junior detectives" club and membership card. There is a membership card you can cut out of the book--yikes! But collectors never fear, they have the same card online you can print out--full color. (I'd suggest printing it on card stock.) They also have activities from each book that are fun and a personality quiz to see if you are a Bess, Nancy, or a George.

Once there click on "activities", and the membership card and other activities will be there to click on.

Email ThisBlogThis!Share to TwitterShare to FacebookShare to Pinterest
Labels: Nancy Drew and the Clue Crew

Here's a synopsis for the upcoming books in the Nancy Drew: Girl Detective series, #20 Getting Burned and also the intriguing #21 Close Encounters:

Getting Burned--The animal shelter where Nancy volunteers burns down--which leaves a lot of displaced orphaned animals and a big case for Nancy. She and her friends put on a concert to raise funds for rebuilding the shelter. Strange people keep joining the volunteer staff though, and someone's trying to foil their plans. Whoever it is has picked the wrong gal to mess with!

Close Encounters--Nancy, Bess, and George head to Brody's Junction, Vermont, to fly down the slopes. Little do they realize they're in for flying saucers! Hundreds of tourists have invaded the town to watch the purported UFO sightings, which are odd enough. Odder still are reports of townspeople being abducted and the strange clues that seem to point to little green men as the culprits. Nancy's mantra, though, is "innocent until proven guilty," and she's hoping to have a close encounter with some hard facts before the town spins out of control.

In other Nancy Drew News, if you remember the 1995 Nancy Drew and Hardy Boys TV series (if you don't, many didn't see it either as it wasn't distributed well), you can order the shows at Amazon Canada (you might also see copies at eBay for sale too.)

Jenn
Posted by Jenn Fisher at 1:49 PM No comments:

Movie News: The May issue of Elle Girl has an article on Emma Roberts who plays her in the movie--she mentions a little bit about playing Nancy Drew.