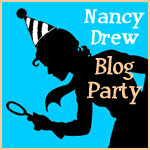 Hope you all have fun and gain a few clues too! 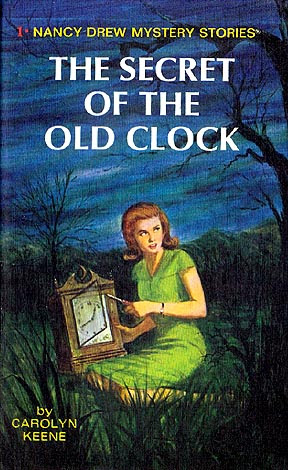 Fans of classic Nancy (hardcovers 1-56 from 1930 to 1979), tend to prefer these to the modern paperbacks. I'd say in my collecting, researching, and consulting expertise, about 85-95% prefer them to anything newly being published.

Why is that? After all, each generation during classic Nancy, if you think about it, had their Nancy. You do realize that 1960s Nancy was not the same as 1930s Nancy during the classic period? The covers had changed, the texts were shorter and being revised during that period. The books were more faster paced. There were differences. But she endured overall. But the Stratemeyer Syndicate was handling the series at this time--it was a family owned operation and run like that, they were really dedicated to these series and Harriet Stratemeyer Adams was like a doting mother. All her time and energy were focused on churning out good "safe and sane" entertainment for children. This kind of business model is very different from a corporate publisher model. That's just the way of the world. Not that one is necessarily better than the other, but they tend to produce very different results sometimes.

Then came the modern era beginning in the 80s with a new publisher, Simon & Schuster taking over publishing in '79 and then outright owning the Syndicate the by mid-80s. We continued the series in paperback from #57 onward. Fans tend to like the early paperbacks--volumes 57 to 78 or thereabouts the best. After the mid-80s, it's hit and miss. There were spin-off series. But the classic series continued on until 2003--ending at #175. During this time-frame every so many years, the series would get a new look or style--different style of covers and models but essentially was the same series with the same formula.

What replaced it in 2004 was the biggest relaunch and update to date--Nancy Drew Girl Detective. This has probably been the most drastic update of the Nancy Drew series over the last couple of decades: 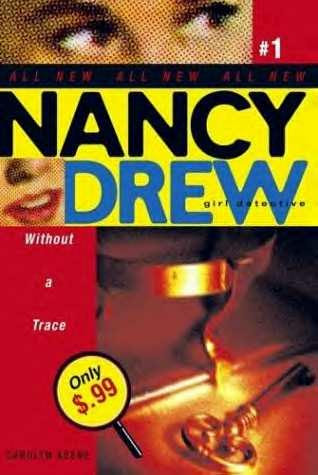 At this time, our fan group was asked for some suggestions while they were revamping the series and working on the relaunch. I sent through some suggestions made on our discussion group list to the editors. We ended up with these drastic changes which differ very starkly from classic Nancy:

1. Stories now told in 1st person instead of 3rd person.

3. George has computer skills and is a hacker

5. Nancy drives a hybrid car instead of her usual convertible.

7. Nancy and Chief McGinnis are now rivals instead of colleagues and his character is not as respectful.

At first the books were pretty nicely written--the camaraderie between Nancy and her chums was believable and easy going, but over time, the continuity and the writing began to suffer a bit. The series wasn't as good as it was at first. And the 7 issues above began to be grating on fans--we've always preferred classic Nancy Drew for a reason--messing with that formula, I think was too drastic of a change in the long run. 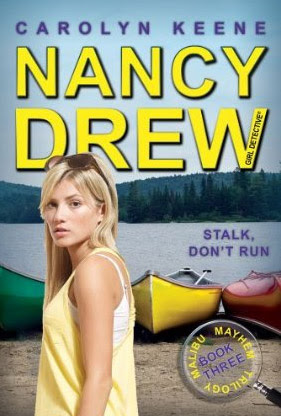 Now, the Girl Detective series, is being ended--will end shortly next year and then will be relaunched into what Amazon.com lists as the "Nancy Drew Diaries" series. The publisher is at work on a relaunch. So, fans young and older, what do you think about a new series? What kinds of advice do you have for editors working on the series? What kinds of things do you wish to see in a new series? After all you are the ones buying (and collecting) the books--let them know what you'd like to see!

Obviously the market for these books is kids--today's kids--not adult collectors :) However, it's also important to realize that it's adults who steer kids in the direction of various books and series (and who control the purse strings to purchase these for the kids)--often based on our own readings as kids and our own nostalgia. I see parents steering the kids toward the classics more than I do the modern. How do you draw in parents to a new series when it's not like what they read? How do you draw in librarians who look back more fondly on the classics? How do you draw in kids who may not be familiar with the series since it's not as popular as it was back during the classic period--and whose friends may not be reading it or may not have even heard (perish the thought!) of it?

It's a very complicated puzzle in some ways. And I don't think there are easy answers. But what I do feel is essential to Nancy Drew is the classic formula--it has played well over the decades, and still continues to make those classics (1st 56) good sellers. And that formula is good suspenseful mysteries featuring a smart and bold girl detective who is good as what she does and inspires others to do more in their lives--helps others in need and has exciting adventures along the way. Nancy has never needed to be the poster child for any particular movement, a forum for discussion of social issues or political topics (like Eco issues). She's always been a "safe and sane" place for pure fun and escape and adventure for kids to travel to with her. I don't care how modern we get in the world, Nancy has always been that safe haven for kids to just enjoy something fun--and just be kids.

Well plotted mysteries with lots of intrigue and suspense have always carried the day and I think they still can even with modern influences like cell phones or computers. I'd like to see Bess as her old self and Chief McGinnis go back to his jolly friendly self. I'd like to see Nancy kick up some dust in a convertible while adventuring around town in River Heights. Send her off to a spooky mansion and it's out in the woods where there's no good cell phone reception, so she has to use her wits as she always used to, to get out of a sticky situation. Let a villain be "haunting" the house to cover up some kind of modern day type crime and let her unmask him with a neat Gothic spooky backdrop. These things can work together--good old suspense and Gothic mystery so prevalent in the classics--and modern style mysteries. And just because we live in a modern world, don't forget, people still do like to see a mystery about missing heirlooms or old-time cold cases being solved. No one ever gets tired of that! It's a lot more exciting than zucchini.

So, friends and fans, please voice your opinions to this Blog on what you'd like to see for Nancy Drew in the next decade or two--be diplomatic about it and keep in mind that postings are on moderation here to weed out the spammers. If your comment doesn't appear right away, do not repost--it will eventually get approved when I see it and get posted.

Thanks for your comments and opinions :) 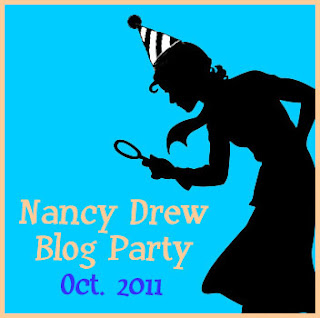 You're Invited to a Spooky Nancy Drew Blog Party!

Featuring contests and giveaways, crafty projects, spooky book discussions, collecting tips, things we've learned from Nancy Drew--anything and everything Nancy Drew. Grab your magnifying glass and hop in your roadster and head over to the Blog for a Sleuth-tacular time!

Blog Party begins Oct. 1st and runs through Oct. 31. Bookmark this Blog, subscribe via e-mail (see up top right) and enjoy the party! Help us promote the party by grabbing the Blog Party Button at the top right and posting it on your blogs and websites. 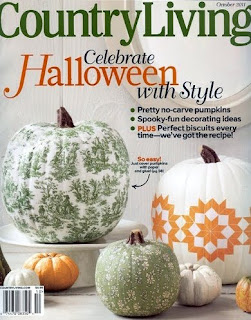 I was very fortunate to be asked to share my Nancy Drew collecting tips and books and collectibles in my collection with Country Living Magazine. They are featured in the October 2011 issue in the Collecting section spanning 3 pages with a very nostalgic layout. It turned out great! Here's a sample of page 1: 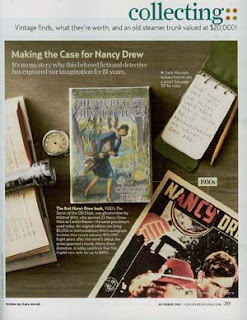 Author Katy McColl contacted me back in April and that's how it all began. Between interviews and e-mails and then sending off items from the collection in June and then edits and what not in August, it all came together for a fun feature for Nancy Drew fans and collectors.

The focus was on decades of Classic Nancy Drew from the 1930s to 1970s featuring books 1-56. We selected a book from each decade that was evocative of Nancy Drew's style and the decade as a whole so I sent off covers for #1 The Secret of the Old Clock, #20 The Clue in the Jewel Box, #31 The Ringmaster's Secret, #44 The Clue in the Crossword Cipher, and #48 The Crooked Banister. 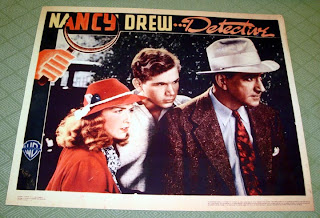 They also wanted a few collectibles for showcasing the decades. A 1930s Lobby Card (repro) was sent off to represent the 1930s Nancy Drew movies. 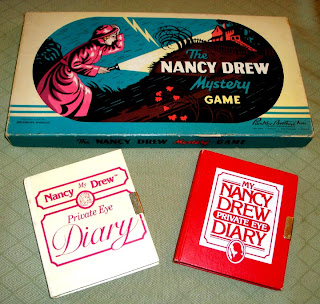 A 1950s boardgame and then 2 diaries for the 1970s (which didn't make the cut). They had a copy of the Nancy Drew Cookbook on hand so they used that for the layout.

It was a great honor to be included in this issue and get to see Nancy Drew collecting be highlighted in a widely circulated national magazine! Hope you enjoy the issue and you are too inspired to collect and reread treasured volumes from the Nancy Drew series. They are timeless!

My Nancy Drew collection is profiled in the October 2011 issue of Country Living--I'm very excited about this :)

If you've found my Blog via this spooktacular October issue, there's more to come!

Leading up to spooky Halloween we'll be having some fun here at the Blog including:

Email ThisBlogThis!Share to TwitterShare to FacebookShare to Pinterest
Labels: Nancy Drew Articles, Nancy in the News 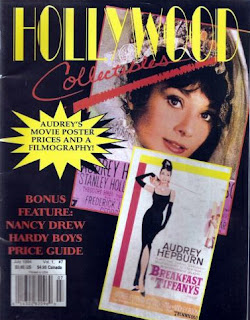 I recently found this magazine at eBay - Hollywood Collectibles - the July 1994 issue. It has a Nancy Drew and Hardy Boys article in it about the TV series from the 1970s plus the Disney shows and the cartoons and also the 1930s Nancy Drew movies.

There are quite a few collectible items pictured in the piece by Anna Kluger.

The article begins by talking about Edward Stratemeyer--and it actually gets the date correct for the founding of the Stratemeyer Syndicate--1905. You often see this misstated in articles and in the media. The article discusses the mystery genre and segues into Nancy Drew and the Hardy Boys.