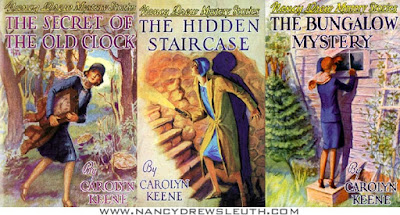 Today, on April 28, 1930, the first three Nancy Drew books were released as a "breeder" set - The Secret of the Old Clock, The Hidden Staircase, & The Bungalow Mystery.

Learn more about Nancy Drew's mysterious history at this link.

I'm writing a biography on the original Carolyn Keene, Mildred Wirt Benson, who at age 24 penned the first three Nancy Drew books plus another 20 of the first 30! Learn more about the bio here.

I have an article at Smithsonian online about Nancy Drew and Mildred Wirt Benson.

At this blog, you can access a blog post at this link about the Drew Team - those who were instrumental in the creation of Nancy Drew and breathing life into her character and helping make her such a phenomenal success!

Next year is Nancy Drew's 90th anniversary and there are a lot of fun things coming to fans of the series. Including Nancy Drew Conventions! We have 2 this year - Toronto and Savannah, GA and then next year for the 90th we have a land and sea event in Hawaii - Honolulu for several days and then a cruise around 4 islands. Check out more info on the conventions at this link.

Stay tuned to this blog for more anniversary news in the coming months. 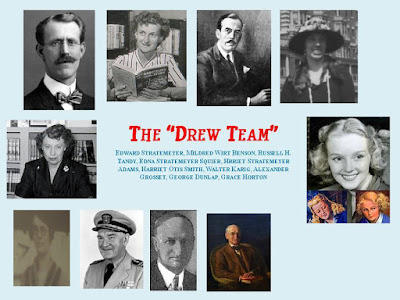 Posted by Jenn Fisher at 3:04 PM No comments: