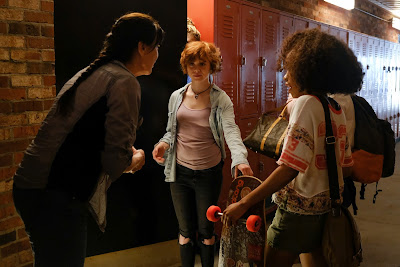 Sophia (center) as Nancy on the set, permission to use from Warner Brothers

The premise is that Nancy Drew, a smart high schooler with a penchant for keen observation and deduction, who stumbles upon the haunting of a local home, is a bit of an outsider struggling to fit into her new surroundings. She and her friends set out to solve the mystery.

The Nancy Drew of the books was not an outsider nor did she ever struggle to fit in--so this brings to mind the sort of "fish out of water" concept from the 2007 Nancy Drew movie that fans didn't take to. The Nancy Drew of the books was bold, daring, up-to-date, fresh and very plucky. Always determined to solve the most baffling of mysteries no matter how hard the villains tried to foil her. I was the Nancy Drew Consultant on the 2007 movie and worked with the director, Andy Fleming, on some aspects of it - which was a lot of fun, when he was revising the script and I got to visit the set of the movie for a few days during filming.

I hope those tried-and-true Nancy Drew characteristics, which inspired many kids to do more in their lives (like our female Supreme Court justices who hail her as an inspiration), are present in the personification of Nancy in this movie.

I have not been given a copy of the script so I don't know anything yet about the treatment of the character in the movie. However, fans can be fickle and often don't take well to drastic changes (including the often cited and more trivial complaints due to looks/hair color) nor Nancy not being Nancy. Modern incarnations of Nancy Drew are often referred as less than inspiring - for instance the Nancy Drew Girl Detective series featuring Nancy often had her stumbling around, bumbling and forgetful, certainly not the clever resourceful girl of the classic Nancy Drew books that are so popular still today.

The cast includes Sophia Lillis as Nancy Drew. My first reaction to the intrepid Sophia Lillis is that she's a dead ringer for juvenile teen sleuth Trixie Belden: 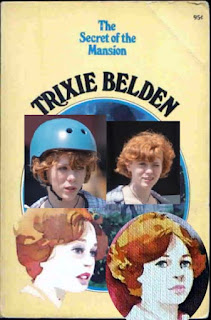 
Previous incarnations of Nancy Drew on the big screen include Emma Roberts as a young 16-year old Nancy in the 2007 Warner Brothers movie and Bonita Granville who starred in the 1930s Warner Brothers Nancy Drew movies including The Hidden Staircase. 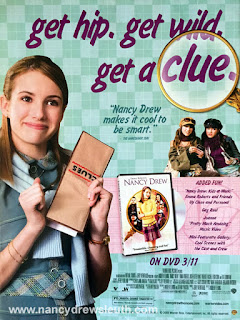 Here are some items from my personal Nancy Drew collection from the 1939 Hidden Staircase film plus a Sherlock style photo of Bonita Granville for film publicity: 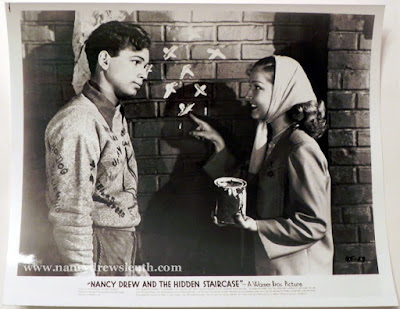 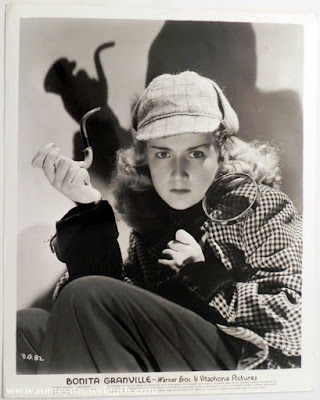 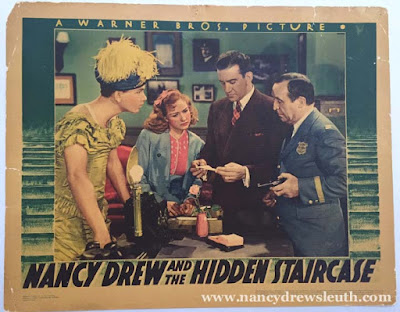 The Hidden Staircase is a very iconic mystery in the Nancy Drew series - book #2 originally published as part of a breeder set of the first 3 titles on April 28, 1930. It was ghostwritten by Mildred Wirt Benson who wrote 23 of the first 30 Nancy Drew books. It is one of my favorite Nancy Drew books and coincidentally also Benson's. I'm currently writing a biography on Benson who was like a real life Nancy Drew - check out my progress and learn more about Mildred at my website.

The premise of Hidden Staircase depends slightly on which text you are reading - the original text of 25 chapters was revised and the revision of only 20 chapters was published in 1959 and that text is still currently in print from Penguin Random House. In fact Penguin still publishes all the wonderful classic Nancy Drew books 1-56 today. The revised version is very similar but adds in a few other plot elements and characters and removes some from the original, removes stereotypes and outdated language and technology/etc. 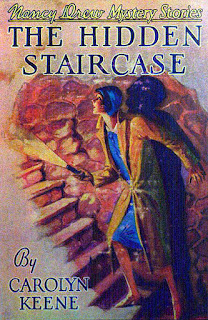 A visit by a sinister fellow who claims Carson Drew swindled him out of land that was condemned for the railroad leaves Nancy shaken as the man threatens harm if he does not get his money back. Meanwhile, mysterious goings on and thefts of personal items at the home of the Turnbull sisters leads Nancy to try and catch the house "ghost." Someone is trying to get the Turnbull sisters to leave The Mansion! Carson Drew's disappearance and a series of events that put Nancy in danger as she discovers a hidden staircase and secret passageway lead to the resolution of this spooky and suspenseful mystery. 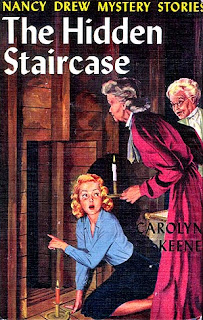 Nancy resolves to help chum Helen Corning's aunts solve the mystery of the ghost who seems to be haunting their home, Twin Elms. A mysterious man appears at the Drew home to warn Nancy and her father that Carson is in danger. This warning leads Nancy and Carson to search for the missing Willie Wharton, a land owner, who can prove he signed away his land to the railroad and save the railroad from a lawsuit. Meanwhile, the disappearance of Carson Drew, thefts and mysterious goings on at Twin Elms, and the discovery of a hidden staircase lead Nancy to solve this baffling mystery. 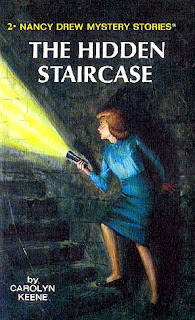 
I own the original painting by Rudy Nappi for Hidden Staircase and it is one of my favorite iconic covers of the Nappi illustration era. 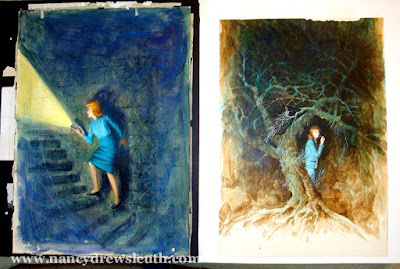 Here's the press release on the upcoming film sent to me by Warner Brothers:

NANCY DREW AND THE HIDDEN STAIRCASE


BURBANK, CA (JUNE 6, 2018) – Warner Bros. Home Entertainment, A Very Good Production and Red 56 have begun principal photography on Nancy Drew and the Hidden Staircase, an all-new feature film that returns the American icon to filmed entertainment for the first time in more than a decade. The production is based in Georgia filming at specific locations in and around the city of Monroe.

The film focuses on Nancy Drew (Sophia Lillis, breakout star of It), a smart high schooler with a penchant for keen observation and deduction, who stumbles upon the haunting of a local home. A bit of an outsider struggling to fit into her new surroundings, Nancy and her pals set out to solve the mystery, make new friends and establish their place in the community.

Nancy Drew and the Hidden Staircase is a co-production between Warner Bros. Home Entertainment, Ellen DeGeneres’ A Very Good Production and Red 56.

Award-winning director Katt Shea (Poison Ivy) helms the film from a script by the screenwriting team of Nina Fiore & John Herrera (The Handmaid’s Tale, The Vampire Diaries). Ellen DeGeneres (The Ellen DeGeneres Show), Jeff Kleeman (The Man From U.N.C.L.E.) and Chip Diggins (A Walk In The Woods) are producers. Wendy S. Williams (The Fate Of The Furious) is executive producer.

As the inspiration for Nancy Drew and the Hidden Staircase, Nancy Drew has intrigued and entertained audiences for nearly 90 years in books, comics, films and video games. An icon in American mystery novels, the character initially appeared in 1930, evolving through each incarnation to reflect the look, sensibilities and technologies of the times. Nancy Drew books have sold more than 100 million copies, and have been translated to accommodate young readers across the planet. A number of feature films and television series have featured the character, starting with Nancy Drew … Detective in 1938. The character last appeared on film in the 2007 release, Nancy Drew, which starred Emma Roberts.

No release date has been set for Nancy Drew and the Hidden Staircase.
Posted by Jenn Fisher at 1:03 PM

I know that the crew did at least a day's shoot in Social Circle, Georgia, which is close to Monroe. I think that they may have used the pre-Civil War house of a friend of mine. Just wanted to give Social Circle its just due!