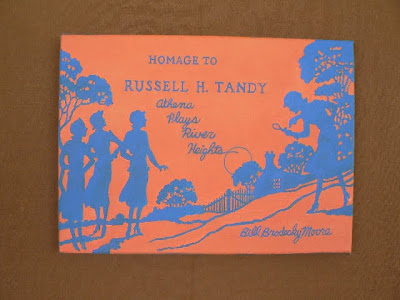 “HOMAGE TO RUSSELL H. TANDY:
ATHENA PLAYS RIVER HEIGHTS"
by Bill Brodecky Moore
Brodecky Moore first painted a Nancy Drew cover interpretation, The Password to Larkspur Lane (edition of 1933) in San Francisco in 1972. In New York in 1973 he completed a watercolor version of Tandy’s cover for The Secret of Red Gate Farm (1931). He began the present series in 2008. Like the earlier paintings, the current series consists of what are essentially versions of the early Nancy Drew covers, although he has made some serious alterations such as the colors of the lettering, occasional adjusting of perspective, and the addition or subtraction of certain painterly emphases, “all in an attempt both to bring out in Tandy’s image the high art that I see in it, and to recover the aesthetic thrill I have experienced through the years in looking at these illustrations and in reading the books.”

All the paintings in this series are oil on linen, and all but one include the lettering of the series name, title and author. One of the paintings is not a Nancy Drew cover, but rather a still-life of a table seen after a meal (Remains of an Impromptu Wake, 41x30 inches), with a blue Nancy Drew book lying on the table among the dishes. The series (with the original publication dates of the novels), includes:

The tenth painting, The Mystery of the Brass-Bound Trunk (1940) measures 80x56 inches. The eleventh, The Haunted Bridge (1937), is from a frontispiece rather than a cover and thus has no lettering; it measures 30x20 inches.

One of the paintings, The Twisted Candles, has been sold. The artist’s preference is to show this with the others in the series. 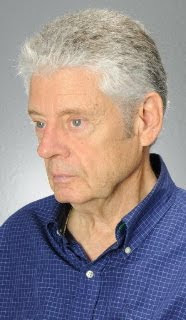 Brodecky Moore’s training began very early, in his grandmother Clara Crowe Green’s studio in Harlingen, Texas. He also had lessons very early from local artists. He majored for one year in art at the University of Arizona (1955-56), then another year in French. In 1957 the family moved to Europe, and Moore attended Johannes Gutenberg University in Mainz for two years, studying German literature, at the same time studying painting under various Mainz-area artists. He then moved to Paris and studied at the Sorbonne for six months, again painting under local painters including Oscar Zalameda and Shirley Covici. In 1962 Moore settled in San Francisco, where he was drawn into what is now called the San Francisco Renaissance and had close associations with artists Jess, Robert Duncan, Paul Alexander, Fran Herndon, and Tom Field (R. T. Field). With Paul Alexander, Moore operated Buzz Gallery, where he showed his paintings along with the above artists and others. Part of his biography appears in Poet Be Like God: Jack Spicer and the San Francisco Renaissance, by Lewis Ellingham and Kevin Killian (Wesleyan University Press, 1998), on the web here.

His paintings are in the following collections: Estate of Robin Blaser in Vancouver, Ernesto Edwards in Salt Lake City (who has arranged that they should eventually go to Utah State University at Logan, which is collecting S.F. Renaissance and Beat material), Vince and Sydney Flynn in Tucson, Paul Alexander in Mendocino, Larry Fagin in New York, Donald Noel Shaw in New York, Dora FitzGerald in Vancouver, Nemi Frost in San Francisco, Glenn Todd in San Francisco, Christopher Wagstaff in Berkeley, Victoria Nott in New York, and others. Some of his biography (under Alvin William Moore as well as Bill Brodecky) appears in Poet Be Like God: Jack Spicer and the San Francisco Renaissance, by Lewis Ellingham and Kevin Killian (Wesleyan University Press, 1998).

Some of Moore’s major influences besides R. H. Tandy are Poussin (in particular among the old masters), Fragonard, Marin, Hopper, Matisse, John Koch, Jess, Paul Alexander, Tom Field and, “like everyone else, a thousand others.” 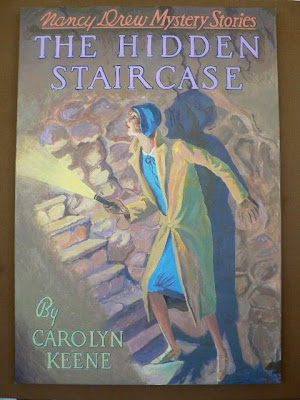 Homage to Russell H. Tandy 7:
The Hidden Staircase
43"x30", oil on linen
Hastily slipping into her slicker and pulling a tight-fitting turban over her curly, bobbed hair, she picked up her flashlight and revolver. She opened the bedroom door and listened. All was quiet. 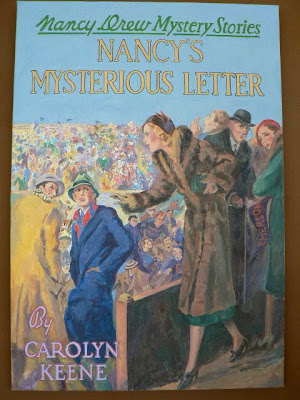 Homage to Russell H. Tandy 5:
Nancy's Mysterious Letter
43"x30", oil on linen
Finally she decided upon a snug-fitting felt of a deep rusty brown, which bore on one side a cluster of pheasant feathers. These she had replaced with a pair of quills in burnt orange color emerging from a fluff of violet down, thriftily retaining the pheasant feathers to put back on the hat after the university colors had served their purpose at the game. 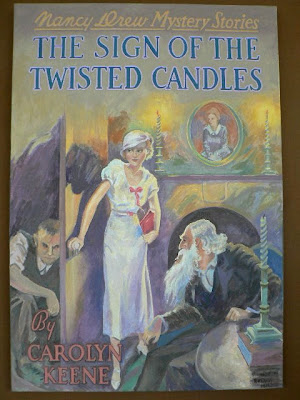 Homage to Russell H. Tandy 2:
The Sign of the Twisted Candles
43"x30", oil on linen
She changed into a lighter frock, for the afternoon had become warm and sultry. It was a simple and inexpensive dress of white silk which she had selected, with a loosely tied scarf of vivid blue sprinkled with a design of yellow blossoms for a touch of brightness. White stockings and white kid slippers completed the outfit, and Nancy made a very pretty picture indeed, with her fresh, natural color and crisp, golden hair as she reëntered her snappy little roadster and headed it toward the center of River Heights. 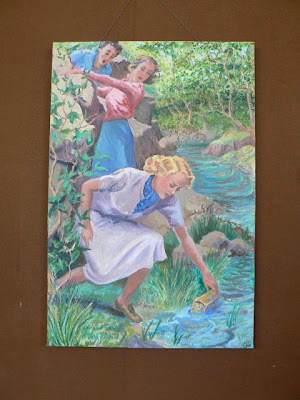 Homage to Russell H. Tandy 9:
The Haunted Bridge
30"x20", oil on linen
It was already fairly late in the afternoon, and by the time the girls had taken showers and Nancy had discarded her crumpled sports dress for a cool linen, she discovered that she would have to hurry if she hoped to reach the caddy house at the appointed hour. 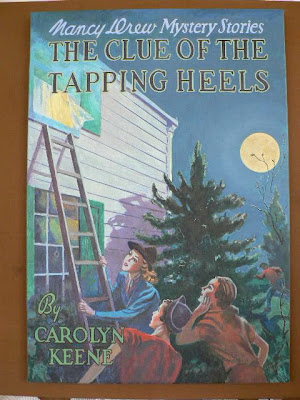 Homage to Russell H. Tandy 3:
The Clue of the Tapping Heels
43"x30", oil on linen
She was so restless that she arose before five o'clock, dressed in her favorite blue suit, and had breakfast waiting before it was time to awaken her chums. 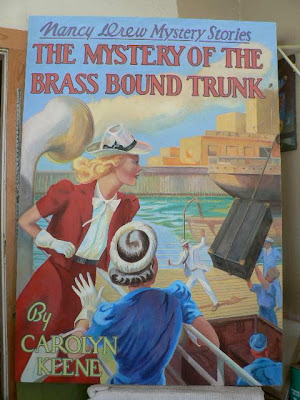 Homage to Russell H. Tandy 10:
The Mystery of the Brass-Bound Trunk
80"x56", oil on canvas
She spent half a day shopping with Bess and George for cruise clothes. 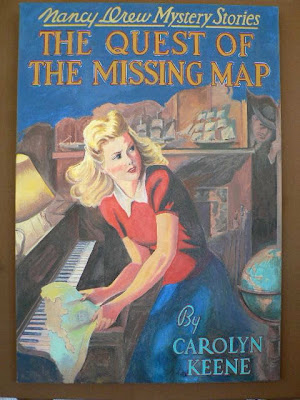 Homage to Russell H. Tandy 6:
The Quest of the Missing Map
43"x30", oil on linen
Nancy's new white dress made on simple lines accentuated her attractiveness. As she descended the stairs to meet Ned she saw his face light up with admiration. 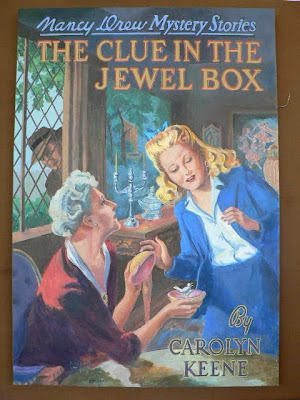 Homage to Russell H. Tandy 4:
The Clue in the Jewel Box
43"x30", oil on linen
The servant vanished, to reappear a few minutes later with a sparkling ornament on a purple velvet cushion. Nancy drew in her breath. She had not expected anything so beautiful The stones, rubies and diamonds, twinkled brilliantly. 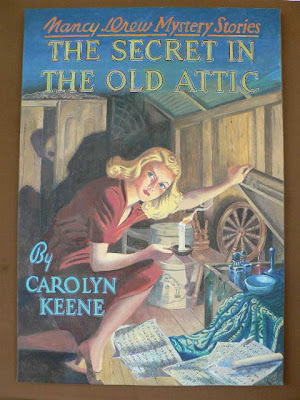 Homage to Russell H. Tandy 1:
The Secret in the Old Attic
43"x30", oil on linen
From her closet Nancy brought out a pale yellow evening dress, soft and beautiful in texture. 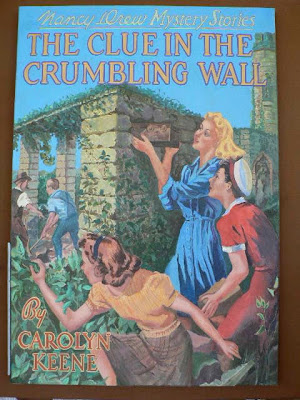 Homage to Russell H. Tandy 8:
The Clue in the Crumbling Wall
43"x30", oil on linen
After a long walk Bess found her way blocked by a crumbling wall. One of the stones had fallen out, creating a perfect peephole. The girl peered through it, hoping to see the road. Instead, she saw the river stretching out below her. On the near-by beach lay a pair of riding breeches. 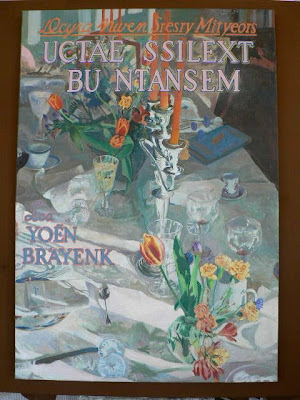 Russell Haviland Tandy was born in 1895 in Brooklyn, New York, and died in 1961 in Sarasota, Florida. He illustrated dozens of children's book as well as producing many other commercial art works. He is best-known for his illustrations of the first twenty-six Nancy Drew books, from 1930 to 1949. He is said to have been a drinking buddy of both Salvador Dali and Ernest Hemingway.

Bill has always loved the Nancy Drew books and still reads them---the first 30, that is. He's reading The Bungalow Mystery now. He started painting the covers in the 70s, but this series is only 2 1/2 years old. 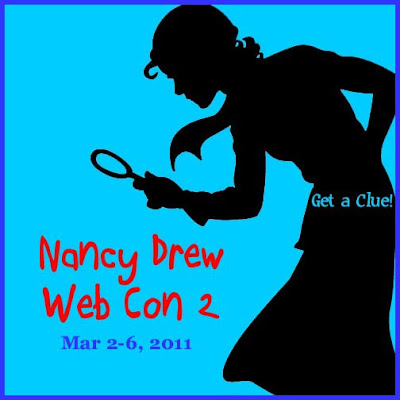 Are you missing out on the Nancy Drew Web Con 2? It's a private online convention Blog with lots of great Blog entries and daily prizes!