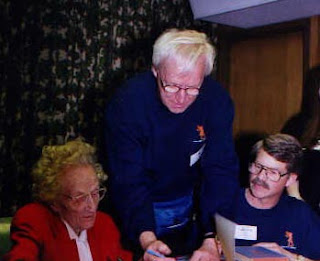 It is with sadness that I make this post today, I just couldn't yesterday. I spoke to Sleuth Rick yesterday and he let me know that John Axe passed away. For those of you who don't know John, he was a series book collector and had written several series book guides that were very nice. All About Collecting Boys' Series Books and All About Collecting Girls' Series Books and The Secret of Collecting Girls' Series Books. They are not in print anymore, but you can usually find copies of them at eBay or other online bookstores from time to time. He especially liked the Judy Bolton series and attended the Coundersport gathering each year, except for this past year. He had quite a wit about him and was very creative and talented, so it was sad to see him decline in the last year of his life. We used to exchange very entertaining e-mails and I have missed that over the last year. He always had something interesting to say and was a great help to collectors. He will definitely be missed!