Getting closer...the movie has a grand Hollywood premiere on June 9th! As in the books, food plays a role in the new Nancy Drew movie. Hannah Gruen sends Nancy some delicious treats--and she even uses them to help sleuth and uncover clues!

Here's my recipe for lemon bars--my Mom's--and it's good! "Not good for a diet though," moans Bess Marvin! It's no wonder Nancy Drew always remained forever slim and attractive, she had the benefit of sleuthercise! Chasing down crooks in dark alleys and climbing lots of ladders and stairs in her signature heels--where can we sign up for that exercise class? Sign me up, I'm there!

(Sleuthing Tip: You can use milk instead of lemon juice, adding a little bit at a time.)

Mix ingredients and spread on cooled lemon squares. These can be frozen.

June 2nd: Don't Judge a Movie By Its Trailer! 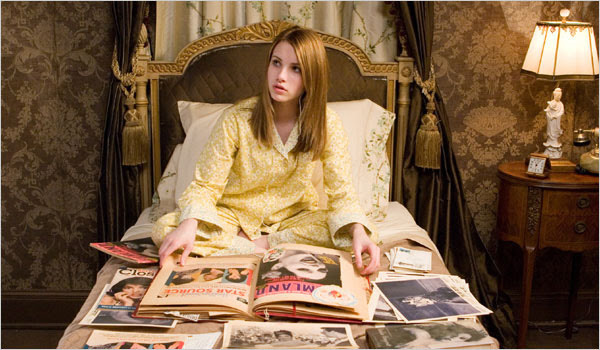 I'm always amused when people freak out about stuff related to Nancy Drew:) I also think younger people tend to be a little more dramatic, since things to them seem to be "the world" and anything wrong is "the end of the world"--due to lack of perspective that comes with maturity and aging.

Not that I need to defend this movie--or my involvement with it--as I think it speaks nicely for itself, but here's a few thoughts. As with any collector/reader genre, there's always the naysayers (or shall we call them the Tophams?), the everythings, and the well it depends folks. I have been amused at some of the e-mails about the movie and the trailer I've received recently now that the movie is about to be released. Yes, the trailer focuses on Nancy vs. the LA mean girls. But, yes, the trailer also focuses on the movie as a mystery--you know, that little something that always intrigued Nancy in the books...

In the movie, Nancy is Nancy, classic like in the classics. She's nice, polite, knowledgeable, good at what she does, and likes to help others--and solve mysteries. She's not about trying to impress others or change for others, she's just herself and does what she loves to do--sleuth!

The movie is a mystery, set in LA, with a subplot of Nancy being this small town girl/"fish out of water" who is different from the LA teens she deals with, but in the end she wins them over. She's serious minded like in the books, intent on solving the mystery. There is some comic relief in her sidekick, Corky and then Corky and Ned's banter. In the end, naturally, she solves the mystery and heads back to River Heights.

Most of the trailer's scenes at the school take place near the beginning of the movie. The rest of the movie is Nancy's sleuthing to get to the bottom of the mystery of what happened to actress Dehlia Draycott.

Honestly, I haven't been given a valid complaint by anyone who has just seen the trailer, and my challenge/answer is to see the movie, you'll find yourself liking it more than you think! You can't really have an informed opinion on the movie, if you haven't seen it. And that's a fact!

Most people I know are very excited about the movie and Nancy being on the big screen after nearly 70 years! Those who have seen it that I've talked with, love it. They find it cute, endearing and so reminiscent of the classic Nancy Drew books in the spooky setting and house, the sleuthing, and Nancy's determination to get to the bottom of the case.

The greatest thing about this movie, is that they kept her classic. They didn't modernize her in a way as to change her character or personality. That would have been a disaster. Kudos to Jerry Weintraub and Andrew Fleming for a job well done--as well as cast and crew!

For fun, here are my 10 favorite Nancy Drew movie things:

3. Blue convertible (not a hybrid!)

4. Opener with vintage books (some are mine) and line drawing images

5. Spooky old house with all the mystery trappings

9. Corky's line: "I think the ability to sleuth is an attractive quality in a woman."
10. Leshing--the creepy caretaker

Well fellow sleuths, just a couple of weeks now until the Nancy Drew movie hits theaters (June 15) and the Nancy Drew Sleuths converge on Pasadena, CA for our annual convention! With our snappy blue roadsters and magnifying glasses of course;)

I'm going to attempt in all the craziness of these last two weeks to update this blog with happenings and news each night (also known as the wee hours)!

Convention planning is at a whirlwind but things are finally coming together as they always do at the last. We will most likely have our biggest turn out thus far, this year! If you're in the LA/Pasadena area, come and join us! www.ndsleuths.com/ndsconventions.html

If you're lucky enough, your area mall may just have Emma Roberts stop by for a visit--she's making a small number of appearances to promote the Nancy Drew film all around the country. The other day she was in DC and got to meet the First Lady, Laura Bush--they both read to kids from The Secret of the Old Clock. Trivia tidbit: Nancy Drew got to have lunch with the First Lady in the original text of The Mystery of the Ivory Charm.

I've been interviewed for a lot of articles on Nancy Drew and the movie in the last week, so will update when articles start appearing. I'm hoping that the movie will inspire more Nancy Drew readers from today's generation and also inspire older fans to rediscover the books.

I saw Nancy Drew displays in the bookstores today, so she's getting more of a push these days!