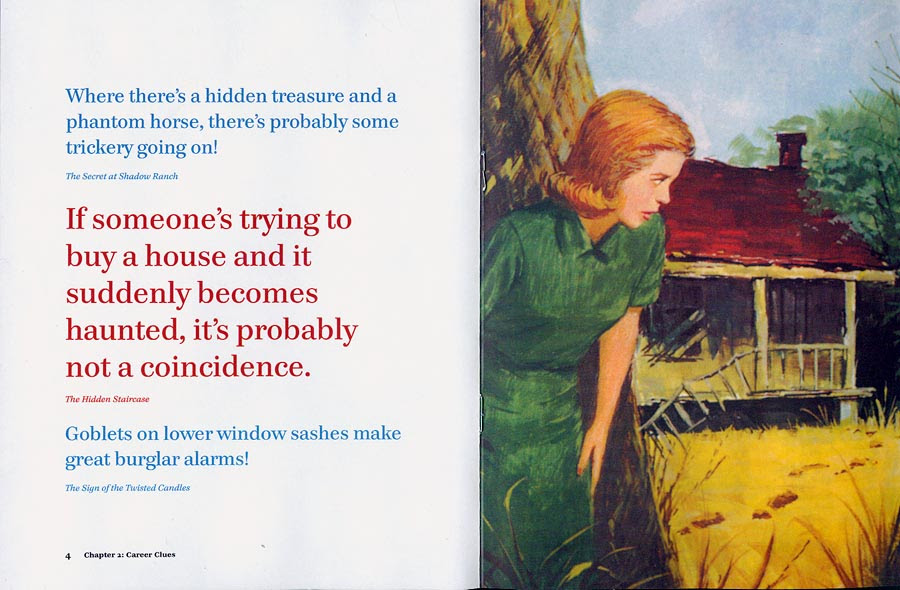 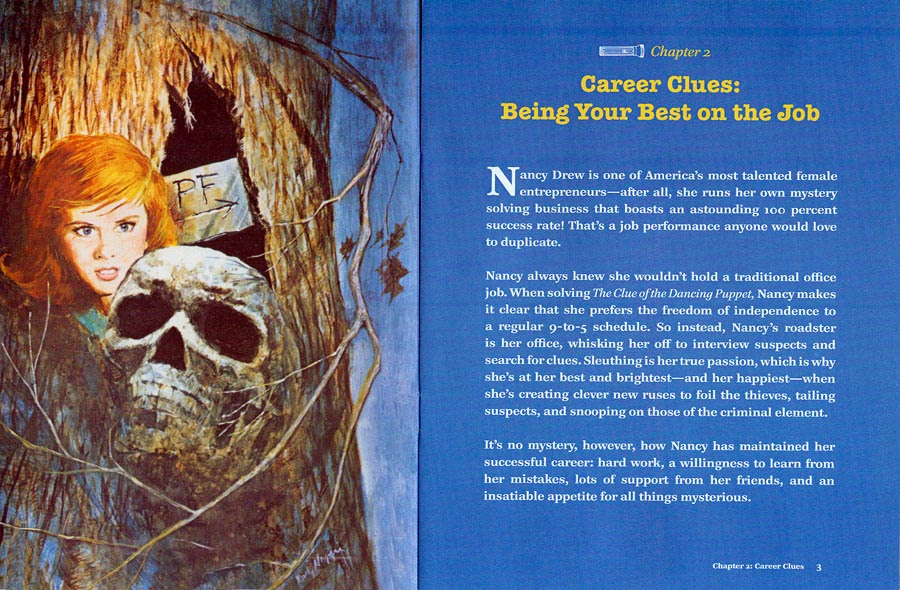 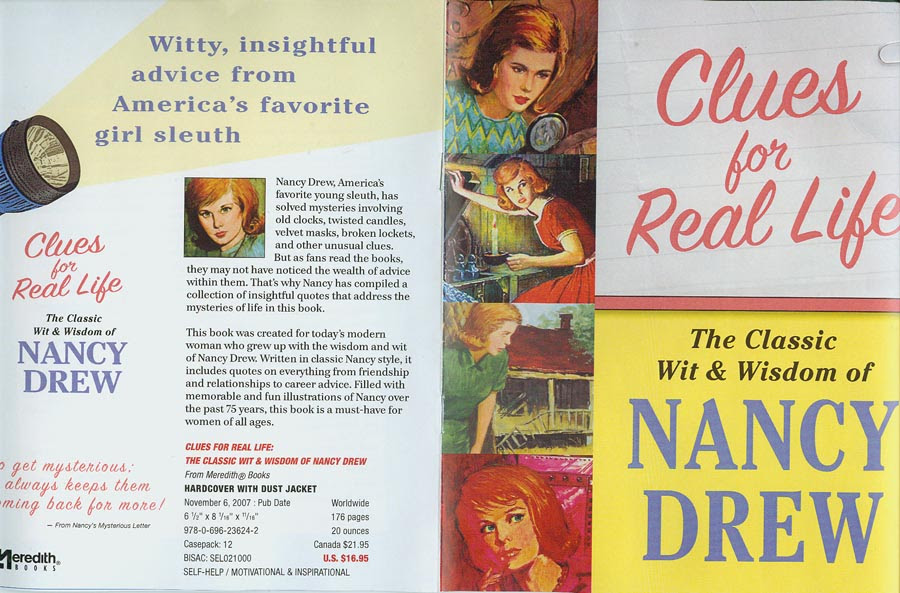 The Nancy Drew nostalgia book I compiled for Meredith Books--Clues for Real Life: The Classic Wit and Wisdom of Nancy Drew comes out in November. I've scanned the advertising flyer for it. Click on the images for larger scans.
Jenn:)
Posted by Jenn Fisher at 1:22 AM 10 comments: 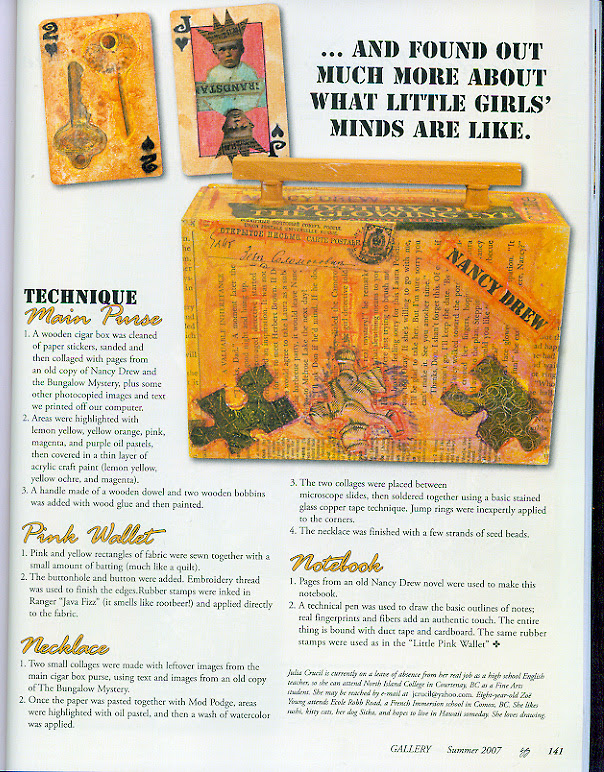 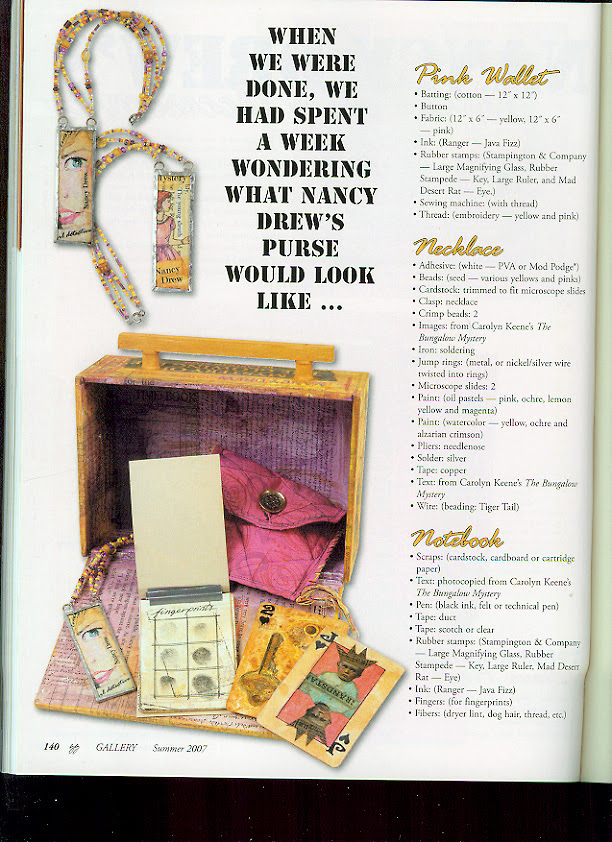 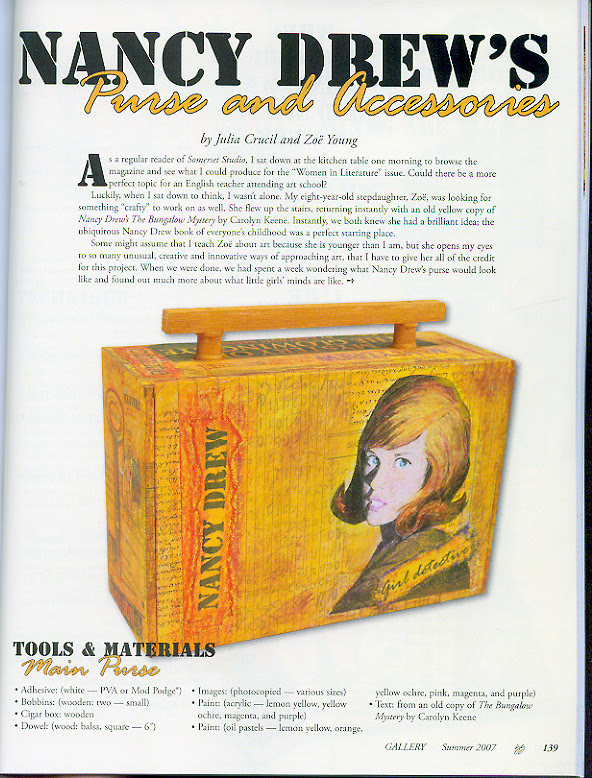 Hi Everyone,
Long time no blog! :) A fellow Sleuth member pointed me to Somerset Studio Gallery magazine, Summer 2007 issue. On page 139 starts a neat Nancy Drew purse project with neat accessories! Here are some small pics of the article and crafts, click on them for larger images. If you need a spiffy summer project, this is it! If anyone makes one, or attempts it, send me pics:)
I actually made a Nancy Drew trunk purse a few years ago decoupaging many images of Nancy Drew all over it. My mom lined it with a blue satin liner and it has a small flashlight and magnifying glass inside it.
Jenn:) (Who's about to turn 34 and wishes she had Nancy's agelessness!)
Posted by Jenn Fisher at 1:11 AM 2 comments:

The Case of How Mysteryville's "It" Girl Goes to Hollywood

The Case of How Mysteryville’s “It” Girl Goes to Hollywood

A spooky old mansion dripping in old Hollywood kitschy glamour. A secret tunnel with plenty of sinister suspects to stir up a good fright. All the trappings of a page-turning Nancy Drew mystery yarn. Yet, this was no musty old book. The scene before me was unfolding through the magic of Hollywood on a soundstage at Warner Brother’s Studios.

The creepy atmosphere of the set was the perfect place to discover a few good clues to Warner Brother’s new movie, Nancy Drew. As the resident would-be gumshoe and Nancy Drew movie consultant, I came prepared. With my proverbial magnifying glass and my keen eyes, I was on a mission. Alas, I was without the glorious blue roadster or fashionable frocks Nancy often sported in her mysteries. No matter, I was just as determined as Nancy ever was to do a little sleuthing and get to the bottom of this puzzler…

Directed by Andrew Fleming and produced by Jerry Weintraub, Nancy Drew will debut on June 15 to much fan fare, for it’s been nearly seventy years since the famous teen sleuth graced the big screen in the 1930s Nancy Drew films starring Bonita Granville. In this modern day classic, Nancy Drew is played endearingly by Emma Roberts.

Nancy remains rather timeless and fixated on mysteries rather than all the things most teenagers worry about like peer pressure and the social scene. Her love for a mystery and “old-fashioned things” contrasts Nancy to the rather spastic teens she must deal with after a temporary move to Hollywood while on one of her father Carson Drew’s business trips.

Nancy’s supposed to be avoiding sleuthing because LA is a dangerous place for a small town girl. But, she’s Nancy Drew. That means it’s in her nature to sleuth, snoop, and get to the bottom of all clues until she nabs the bad guys and saves the day. We wouldn’t have her any other way.

Doesn’t every eccentric movie star who dies a mysterious death leave behind a spooky old decaying mansion with a creepy caretaker and a mystery just waiting to be solved? Well, in Hollywood anyway, she does. Enter one intrepid teen sleuth.

A long way from small town River Heights, Nancy finds herself in a not so friendly setting and laments, “In my book, courtesy counts!” Just how does Nancy find herself such a fish out of water? Read on for a few good clues…

Fashionable Clues Behind the Scenes of Nancy Drew

The mansion’s staircase seemed a tad rickety. The walls were crumbling. Vines had magically worked their way inside. Everything was glamorous yet dingy and it was believable. I’d literally stepped back into a time warp.

As I climbed the stairs to the mock second floor of the Draycott mansion, amidst the hustle and bustle of the crew, I ran into “Carson Drew” complete with robe, slippers and an old faded “River Heights Police Department 10-K Run” T-shirt. A fabulous lawyer and fit—now that’s my kind of Carson Drew!

An attic scene had just wrapped in which Carson arrives after a ghostly ruckus for a classic Nancy Drew movie line, “The Four Seasons isn’t haunted. What do you say?” I don’t think so! Anyone who knows Nancy Drew, knows she’d never end up at the Four Seasons when a “haunted house” is calling…

Tate Donovan, the actor behind attorney Carson Drew, waxed nostalgically with me about the movie and reading Nancy Drew and The Hardy Boys. I think the collector in me was fixated over that River Heights T-shirt, but I’m pretty sure he said he enjoyed playing the role!

Enter costume designer, Jeffrey Kurland, who designed the movie’s costumes. Kurland wanted to keep the look of Nancy timeless and elegant. In the movie, Nancy’s look is dubbed “The New Sincerity” complete with penny loafers, headbands, and classic lines. Can you say “Penny Loafer Fashion Moment?”

My next obsession became Nancy’s infamous sleuth kit. I was thrilled at its fashion-forward cleverness. The inside plaid design matched the lining of her coat and the seats in her snappy roadster!

Just what does Nancy carry in her kit you might wonder? In exploring the contents of the kit, I discovered an umbrella, a suped up flashlight, Ipod and recorder, digital camera, multi-tool, powders for fingerprinting, magnifying glass, evidence bags, lock picking tools, a pen, a container for a snack—like Hannah Gruen’s luscious lemon bars for calming cranky crooks, and a sweet little book marked “clues.”

All quiet on the set! Emma Roberts began filming a scene in the attic looking for evidence in old books which were full of dust that she blew off with each take. As musty and dusty as the attic was set up to be, my keen eyes spied a mock poster of Dehlia in a movie entitled “The Haunted Bridge.” A nod to the Nancy Drew book of the same name.

After the scene wrapped, Emma Roberts breezed over and introduced herself. Her burning question for this Nancy Drew expert? “What is Nancy’s mom’s name?” I was sorry to disappoint her, but Nancy’s mom was never named in the books. If you’re wondering what exactly happened to Nancy Drew’s mom, well that’s a mystery for another day. One likely to remain unsolved. Back to the set, Emma decides she’ll name her Margaret.

We segue way to an attic scene with actor Josh Flitter playing Nancy’s sidekick Corky. Gone are Nancy’s foil friends plump Bess Marvin and tomboyish George Fayne who only make a brief appearance at the movie’s beginning. Enter 12-year-old Corky who provides comic relief and develops a crush on Nancy, becoming an irritating thorn in Nancy’s boyfriend Ned Nickerson’s side.

Between freaking out at nearly being run down by goons to Corky’s amusing pick up lines like, “I think the ability to sleuth is an attractive quality in a woman,” to his giggling at Nancy’s daring jaunt into a tunnel, Corky doesn’t quite get the seriousness of all this mystery business. His character is a great contrast to Nancy Drew, who’s serious-minded when it comes to solving a case.

Part teenager, part mystery machine, Nancy Drew has had a one-track mind for over 77 years and there’s no stopping her affinity for getting to the bottom of something fishy. Tweaking this aspect of Nancy’s plucky personality would never do. Fans might revolt. Seriously.

Kudos to director Andrew Fleming for keeping Nancy tried and true. I chat up Fleming about the film’s classic Nancy Drew style. Fleming is busy pacing around the scene, getting the feel of the room as he enthuses about the film’s vintage movie quality. To him, the setting is timeless and fans should enjoy it. A fan of the classic Nancy Drew mysteries (the first fifty-six), Fleming and the crew worked hard to bring the mysterious aspect of the old decaying regency style mansion to life. Taking Nancy Drew out of her comfort zone in River Heights to LA, was a conceptual way to emphasize her timeless character when contrasted with the ultra modern movers and shakers in LA.

Recently Fleming stated, “There was a moment when I thought, why don’t we make her totally modern, give her high-tech gadgetry, make her sexy and hip? But if we did, what’s the point? Why call her Nancy Drew?”

Nancy Drew just wouldn’t be Nancy Drew without a few clues to uncover. Add in a secret tunnel and it’s the crème de la crème for mystery buffs. How apropos it was that I stumbled upon the entrance to the infamous secret passageway through Nancy’s bedroom fireplace. Unfortunately, with some resignation, I realized this would be just a tad too big to secrete in the back of my car. I stopped short of taking measurements to be sure. Nancy once used her skirt as a ruler in The Witch Tree Symbol. So, I suppose I could have improvised!

After a round of takes involving the secret passageway, I asked Emma how she got the part of Nancy Drew. She said she was interested in playing such an iconic character, though it was a daunting role in some ways. She hoped they were doing it right—creating something that Nancy Drew fans would approve of.

Nancy Drew fans can be fickle. They don’t like their Nancy Drew messed with. Yet, fans of all ages and generations should be happy to see that Nancy is still Nancy and that’s no mystery.

Later, as I’m about to leave mysteryville for my soundstage exit back into the real world, I sweetly pester the prop guy about interesting movie set collectibles. However, I had no blondies like Nancy uses in the movie to wheedle for more clues.

Did this mystery reporter uncover the clues to solve the puzzler of how Nancy Drew makes it in Hollywood? You betcha, and it’s one sizzler of a case. Check it out, June 15th, in a theater near you. There’s already talk of a sequel and the movie hasn’t even premiered yet! Sequel or not, whether on the big screen or throughout the pages of time, Nancy Drew will always be every generation’s mystery solve-It-girl!

The filmmakers hired an etiquette coach to help refine Emma Robert’s depiction of Nancy Drew as an elegant young lady.

Emma describes the movie’s convertible as “a bathtub on wheels.”

Emma didn’t have her driver’s license yet when filming was underway, so she had to be pulled around by a trailer in the driving scenes.

Emma didn’t read the Nancy Drew books before signing on to the role, though she’s reading them now.

In a recent interview, Emma noted, “Nancy and I are both passionate, determined and ambitious. She will not give up until she gets the results she wants. I am very similar in that way.”

Emma says the biggest difference between she and Nancy Drew, is that Nancy Drew is perfect.

In the movie, Nancy Drew uses delicious lemon bars to calm cranky criminals and blondies to wheedle clues out of people.

Actors Bruce Willis and Chris Kattan have cameos in the film.
Posted by Jenn Fisher at 12:38 AM 6 comments: