The press release for the UCSD Nancy Drew exhibit and live events on August 15 and August 17 has been issued. Check it out!
Hope some of you get to attend, looks like it will be lots of fun! I'll be doing a phone in interview during the live event. 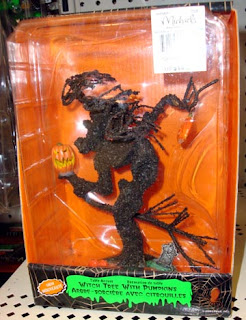 I was at Michael's crafts store the other day and they had their Lemax Haunted Halloween Village pieces out. They have one piece that's a kind of tie in to the Nancy Drew classic book The Witch Tree Symbol. It's described just like that: a witch tree. Kind of cute. Could be used in displays with the book for your Halloween decorating! I'm doing Nancy Drew and Hardy Boys again this year for our Halloween theme. 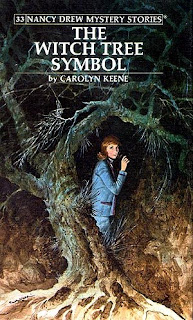 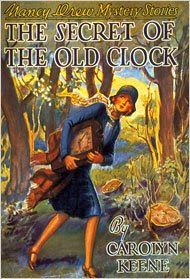 I was interviewed this week for a NY Times piece that's now up online. Will be in this Sunday's NY Times paper --Sun. July 19th.
I talked about with the writer about all things Nancy and there's an interesting quote from me that made it into the article.

And it does mention Nancy Drew fan conventions so maybe we'll get some Googling to find us as a result. I'm not sure if the print edition will have more images or links in it. Looking forward to seeing a copy. 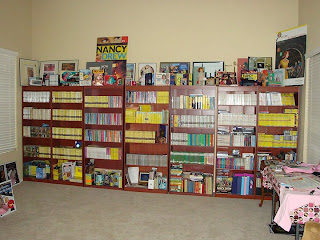 On Monday of this week, I heard from a producer at Good Morning America (ABC) that they were doing a piece on Nancy Drew. With many famous women being inspired by Nancy Drew, they were trying to get to the bottom of that phenomenon. They wanted to see if I would be interested in being interviewed and have my collection be filmed, provide book covers and so forth.
And they wanted to come Tuesday morning ;) Of course, I was thrilled and happy that most of my collection was already set up still so I didn't have to get out a lot of extra things. I have a lot of misc. items like novelties and hand crafted items and paper ephemera that aren't displayed as I really don't have a great way right now to do so, so a lot of that is boxed up. Some of my books are boxed too and the books/series by Mildred Wirt Benson are stored. 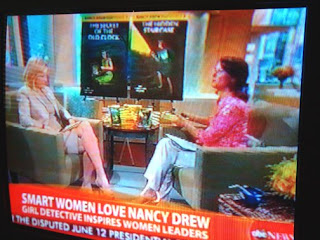 2 freelance guys--Travis and Charlie--came out to film. One filmed, the other was the sound tech. They spent about an hour setting up the equipment--lots of cables, cameras, lights, and stuff! Then GMA called in on speaker phone fed to me through an ear piece hidden by my hair and I spoke to the producer for about 15 minutes answering questions. I had to look off camera at the sound guy so I wouldn't look directly at the camera. They put me on this bar stool so the camera angle was kind of from below which is in my opinion not too flattering ;) In one segment my right side of my nose looks larger than my left. Uggh :)

After the interview, they filmed some of the books in the collection. They had me pull some that Sonia Sotomayor might have read as a child which I narrowed down by her age and when she'd have been around 8 and then determined the first 42 to 43 books would have been available during her reading years. 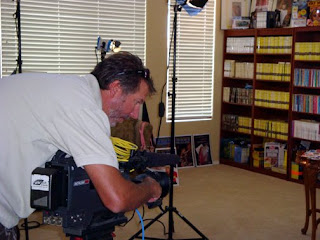 I also read a passage from one of the books and some quotes from my book which never made it to air. I was filmed walking to my shelves and picking some books off the shelf and thumbing through them. Thumbing through them while standing at a table--some of that made it in. And filmed coming down the stairs as he filmed my Staircase painting at the same time. 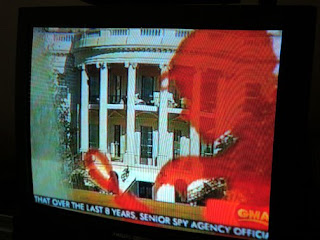 I had the large felt banner with the black silhouette of Nancy we've used at past Nancy Drew conventions hanging and they imposed that in the piece over some book covers. They also filmed the orange silhouette endpapers which they used to impose over the White House.

They had me send them some images of villains and Nancy and those made it in. I also sent them images of Mildred and Harriet which they didn't use. All in all they filmed for nearly 2 hours for what you can see goes into a small 3 minute or so segment. Lots to work with. Lots left on the cutting floor.

It was a nice experience and I had a lot of fun doing it!