I was shopping in Half Price Books the other day and purchased over 30.00 so I got one of their calendars free--these calendars feature literary figures' birthdays and other information throughout the calendar as well as coupons in the back to save throughout the year.

I decided to turn to the April to see if perhaps Nancy Drew was mentioned, nothing. Then turned to October--and on the 4th of October it lists Edward Stratemeyer along with Brendan Gill and Damon Runyon--neat!

If you have one of these stores, check it out! It looks like they have then in AZ, CA, IL, IN, IA, KS, KY, MN, MO, NE, OH, OK, PA, TX, WA, and WI. Check out their website for locations near you:
http://www.halfpricebooks.com 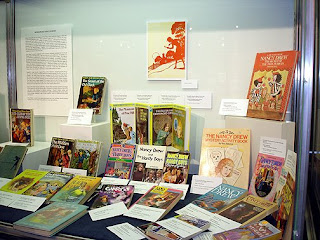 The University of Michigan at Dearborn held a reception at the Berkowitz Gallery in the Mardigian Library on September 12, 2008 to go along with an exhibition on children's series books including artwork that was displayed. The exhibition, “Timeless Treasures: Children's Series from the Juvenile Historic and Quigley Collection,” was on display from September 12 through October 24. The displays included many different series books with highlights on Nancy Drew, Mildred Wirt Benson books and series, and Tom Swift. There were Laura Ingalls Wilder books and memorabilia and Oz too plus a nice Uncle Wiggily display.

I was contacted last year about speaking at the event. In doing research for the exhibition, they came across my website and decided they’d like to focus especially on Nancy Drew as a draw for the reception. You can visit this section of the university’s website for more information on the exhibition:


And you can access a nice newsletter online that covers the event and has photos:


My focus on the presentation was Nancy Drew history over the years and the various formats and collectibles with a section on Nancy Drew cover art. I featured some of the Tandy and Nappi art as well as Gillies for the classic books. Over 100 attended the event. It was very interesting to meet everyone who attended which included some writers who had written articles about Nancy Drew. There were many fans of all ages and quite a few librarians.

This was the first time I had been flown in for an event to speak. The accommodations were lovely and the weather was great—cool and rainy compared to the heat and dryness of Phoenix. We went to lunch the day of the event at the old Henry Ford mansion on the campus which offers tours. They converted an indoor pool room into a dining room. The food was great and the service excellent—I’d recommend a visit to the estate for anyone visiting the Dearborn area. After the reception I attended a small private dinner with the organizers, some university employees and those who had donated or loaned quite a bit to the collection. 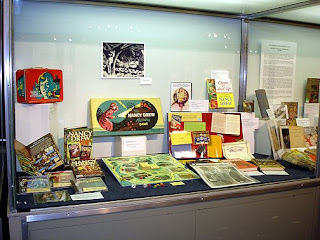 The library is accepting donations of series books for the collection. One nice thing about this collection, is that they don’t loan out the books, they keep them there, if anyone wishes to view them, then they can do so in-house. So, if you’re looking for a place to donate some of your series books or you would like to find a home for them at some point in the future, consider the University of Michigan at Dearborn’s Mardigian Library archives.

Being so close to Toledo, Ohio, I managed to work out my return flight a few days after my talk which gave me time to visit friends in Toledo and do more research on Mildred Wirt Benson. I stayed with Sleuth Rick and his wife Brenda who hosted our group on two occasions in the past and as usual they were super hosts! I did some book hunting with Rick at an antique mall outside of Toledo and checked out Frogtown Books. I found a few books but the neatest finds were at the antique mall. I came upon two large hardcover sets of St. Nicholas magazines bound—several issues in each volume. I found two of Mildred’s short stories!

I had received permission to visit the Toledo Blade’s library to research past columns. On a previous visit in 2002, I had visited there and had gotten some research, which led me to the public library to access past issues of The Blade. Apparently I’m not a whiz with microfilm, as I managed to get some articles home that had only page 1 and not the second part of her column. So I had made a list of what I needed on this current visit and those articles were printed and ready for me at the Blade. I also accessed more of her older columns on microfilm and went through several boxes they have archived there about her. They have articles on her, books that mention her, and other miscellaneous items as well as a lot of photographs of her over the years. They also have a lot of her columns—clippings—saved in folders that I was able to go through and copy. Some other things she wrote and a neat interview that was done with her and a Blade employee before she died. The transcript is hilarious to read in parts as it was really a tug of war between Millie and this employee at times over questions being asked and answers being given. I think they were both probably exhausted by the time it was all over.

I also spoke to some of the employees there about her and a few other locals and got some leads to follow. All in all, I sent back a huge box of copies and notes to myself to add to my stack of growing clues to just who is Mildred Wirt Benson beyond the whole legacy of her just being most famously known as Carolyn Keene.

If you are interested in contacting the university to donate books or set up a donation in the future, please contact Barbara Kriigel:

Posted by Jenn Fisher at 9:57 PM No comments: