Nancy Drew Meets Shakespeare's King Lear - "I have no way, and therefore want no eyes!" 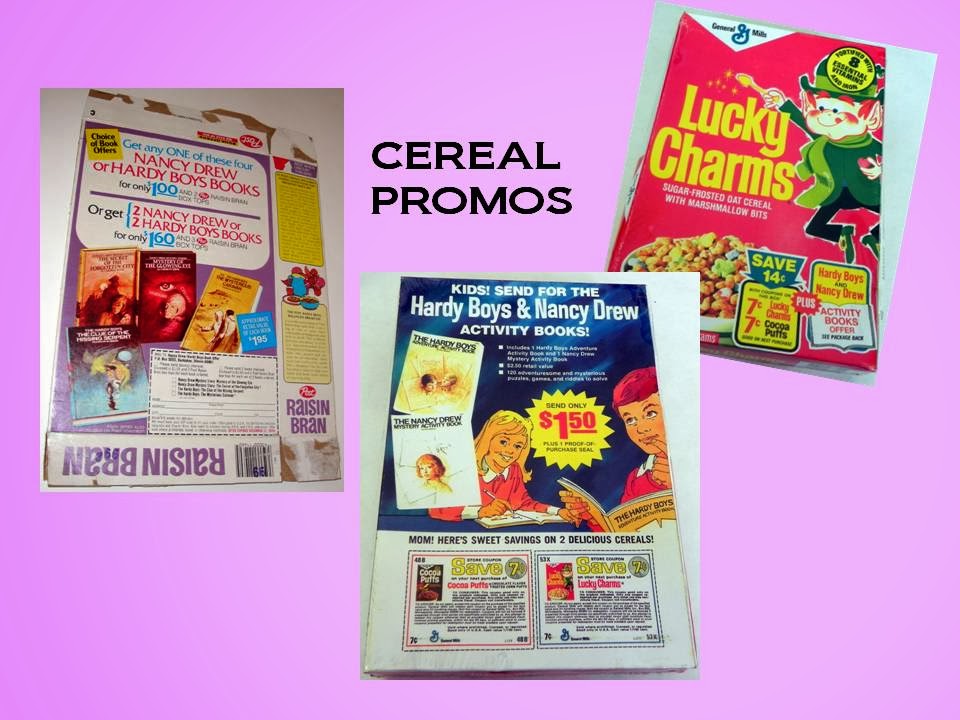 Fans of Nancy Drew who search for elusive and harder to find collectibles should add the cereal promotions to their list if they haven't seen these before. There were several different cereal promotions - Cookie Crisp had 6 mystery paint books you could get--they included paint that you could use to color in the line drawing panels. Lucky Charms had a promo going where you could get activity books. And Raisin Bran also had a promo where you could send off for books. Some years ago there was a collector making reproduction boxes--and so the Lucky Charms box pictured above is a reproduction. The Raisin Bran box above is original and the Cookie Crisp box below is also original. 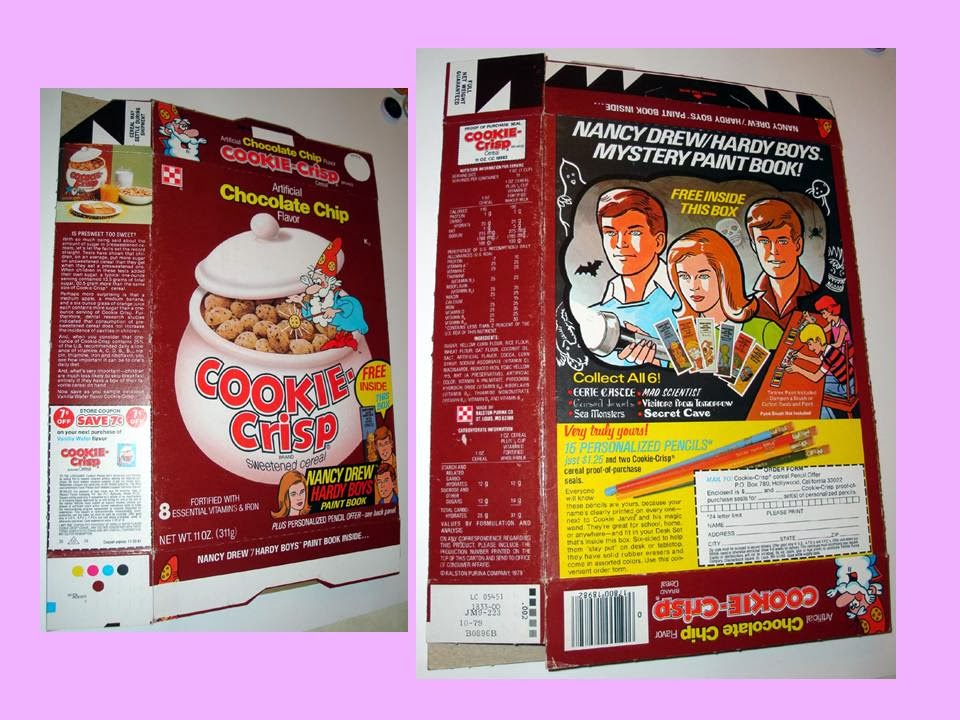 Finding these booklets was quite a journey, but I managed to complete the set several years ago by finding the Visitors From Tomorrow with the alien on the front in a Flickr search and the owner agreed to sell it. Sometimes you have to think outside of the eBay box because you just don't see the wide range of collectibles there anymore like you used to. 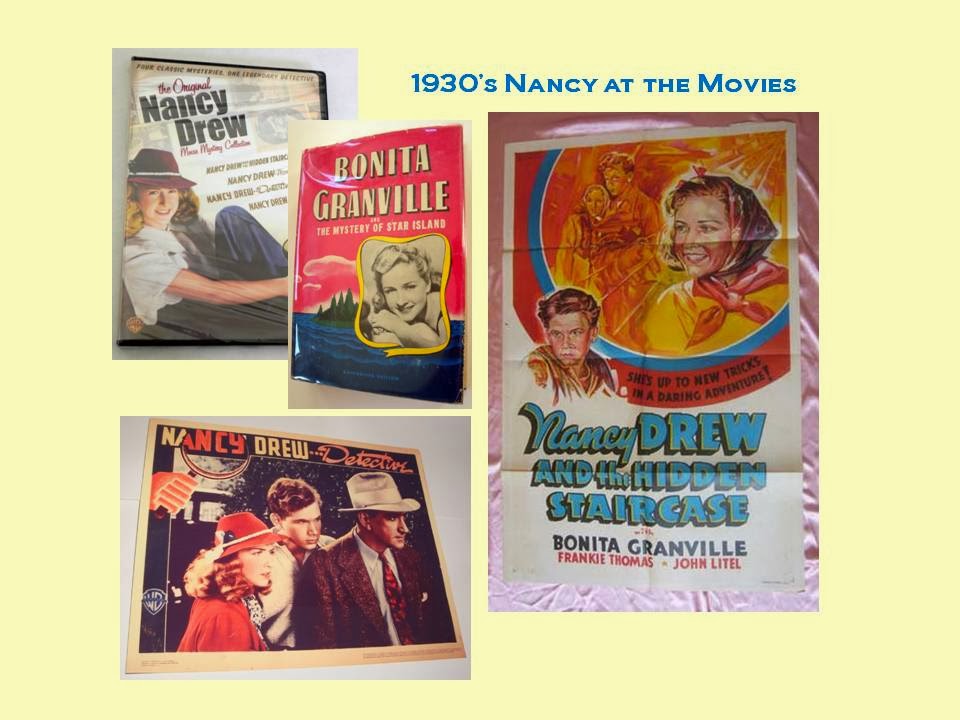 
Here's a sampling of some of the 1930s Nancy Drew Warner Brothers movie collectibles out there to collect. Lobby Cards, Posters and other theater items like the lantern slides are very hard to find for these movies. Stills and reproduction lobby cards are more plentiful. Old magazines with movie articles can be found too plus ads like the Lane hope chest ad below featuring Bonita Granville and also making mention she was starring as Nancy Drew. Bonita also "starred" in her own fictional Whitman book--a mystery similar to the Nancys, The Mystery of Star Island. 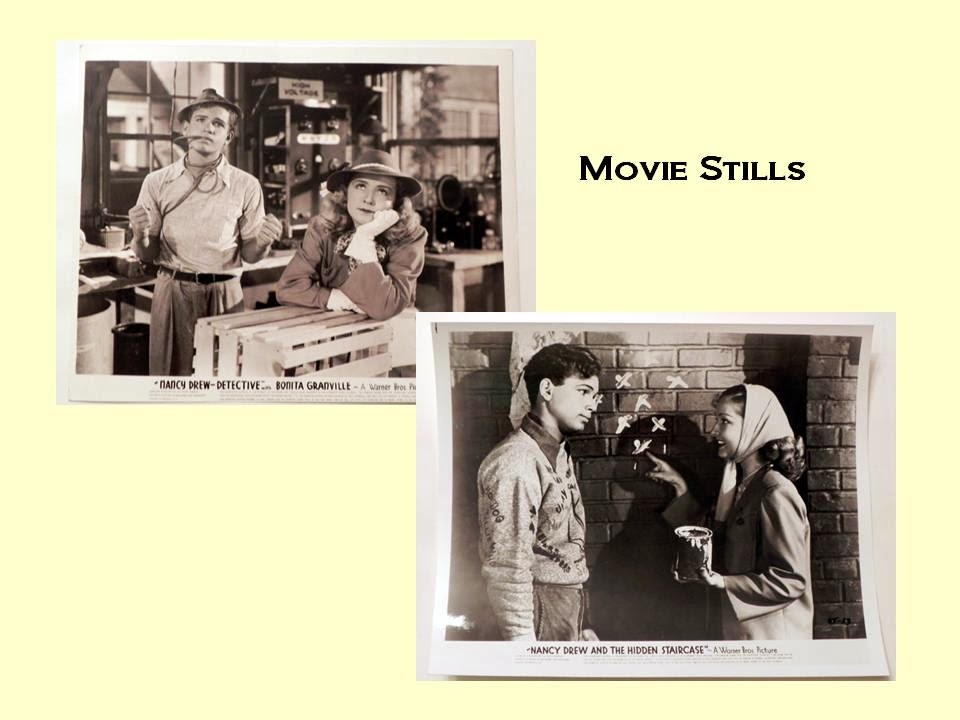 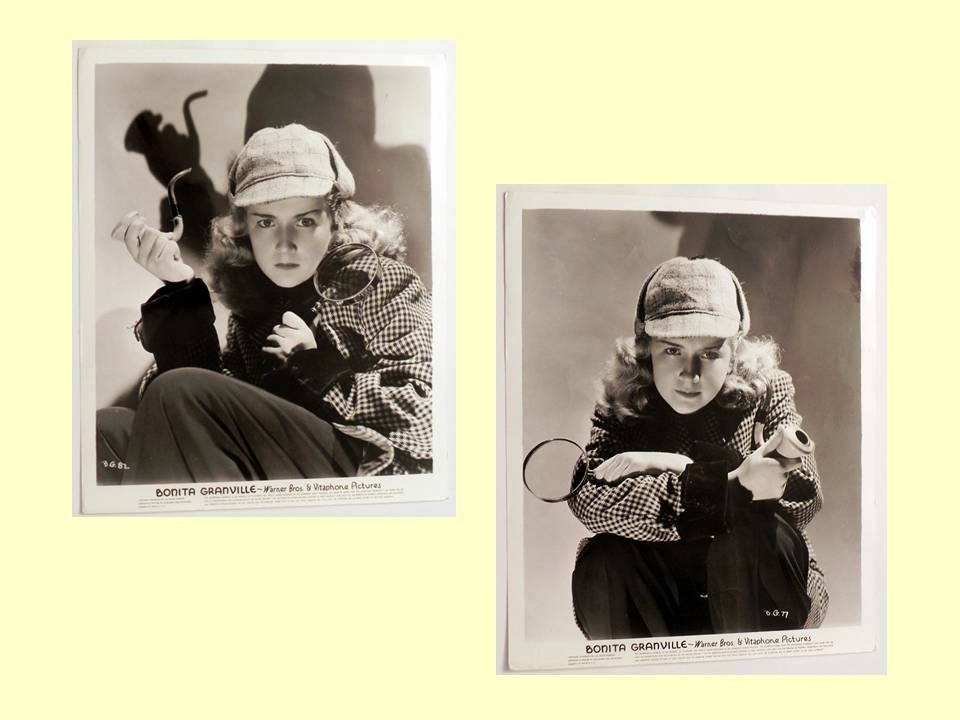 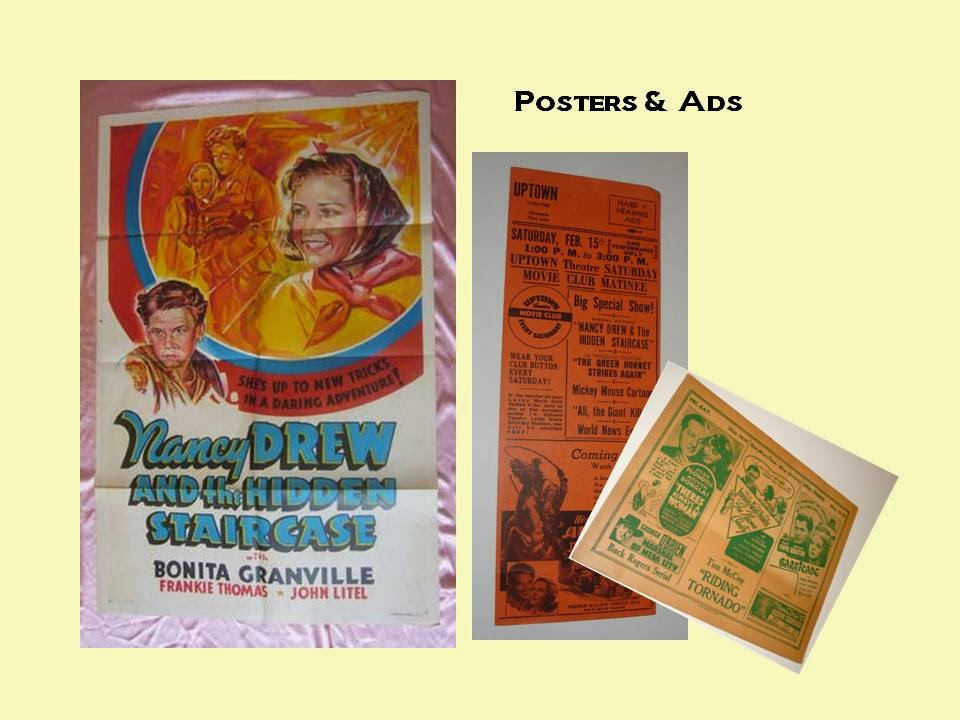 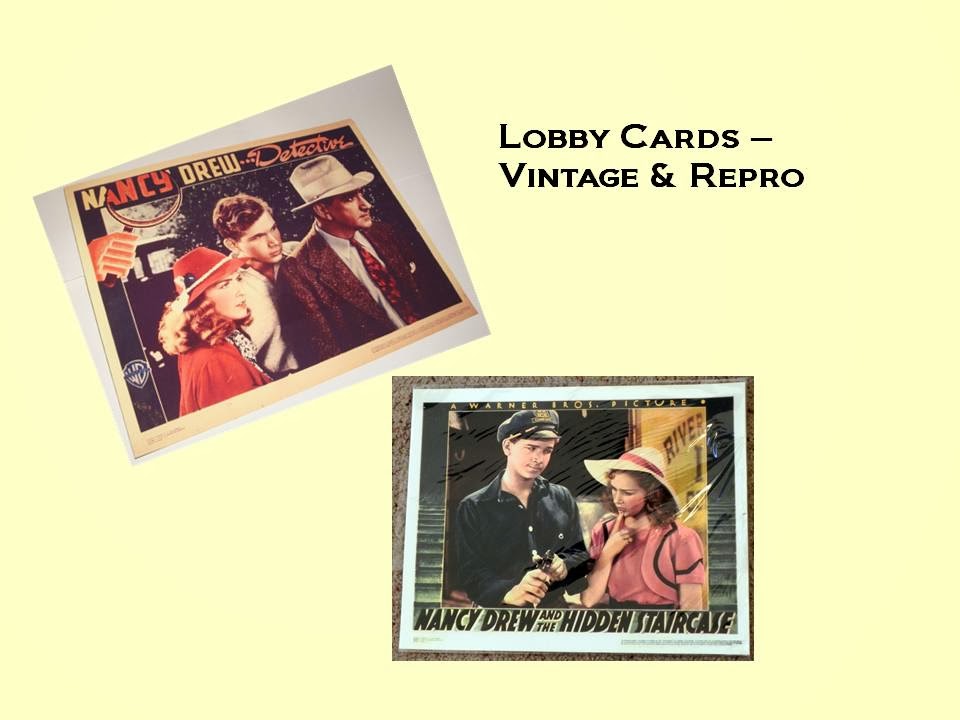 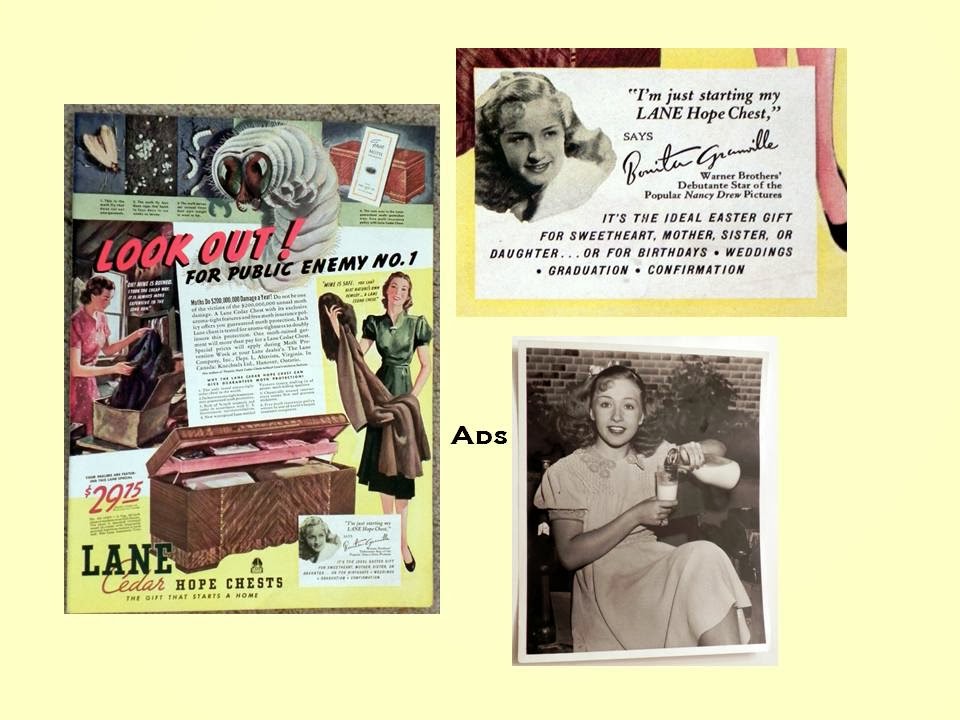 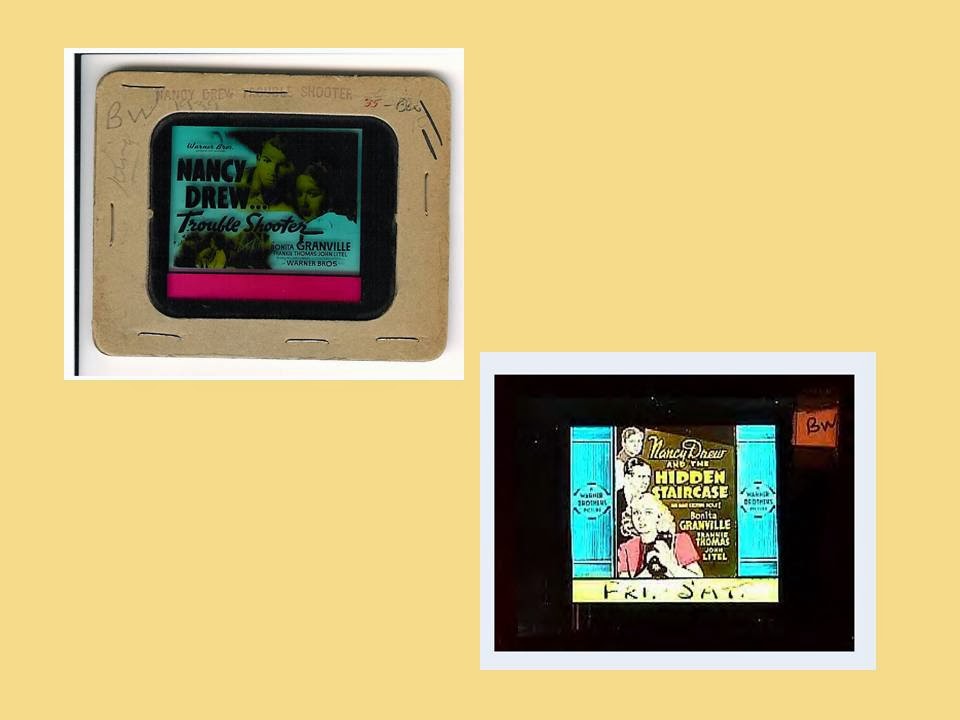 The Silence of the Library - a Miranda James Mystery 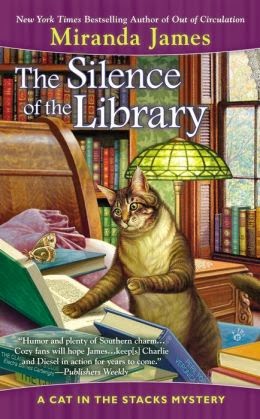 To be published on January 28, 2014
A Berkley  Prime Crime Mass Market Paperback

A Synopsis of The Silence of the Library:

Everyone in Athena, Mississippi, knows Charlie Harris, the librarian with a rescued Maine coon cat named Diesel. He’s returned to his hometown to immerse himself in books, but a celebrated author’s visit draws an unruly swarm of fanatic mystery buffs…and one devious killer.

It’s National Library Week, and the Athena Public Library is planning an exhibit to honor the centenary of famous novelist Electra Barnes Cartwright—creator of the beloved Veronica Thane series.

Charlie has a soft spot for Cartwright’s girl detective stories (not to mention an extensive collection of her books!). When the author agrees to make a rare public appearance, the news of her whereabouts goes viral overnight, and series devotees and book collectors converge on Athena.

After all, it’s rumored that Cartwright penned Veronica Thane stories that remain under wraps, and one rabid fan will stop at nothing—not even murder—to get hold of the rare books…

Without giving away any of the plot aside from the synopsis or whodunit, I really enjoyed this book - I especially enjoyed the Maine coon cat Diesel. Having never seen a Maine coon cat before, I was inspired to Google this animal to see just how large they really are. I enjoyed the mixing of real life vintage series with the fictional Veronica Thane series which we even get snippets of one of the Veronica Thane stories which is blended into the book as the hero, librarian Charlie Harris, is reading one of the vintage volumes while trying to solve the murder. Imagine if we all, discovered, that one of our favorite series book writers was still living and nearly 100. I imagine, quite like in this book, that people would end up converging upon the scene. Now, would they be as bold as character Gordon Betts, with more money than manners, expecting a nearly 100 year old writer, Electra Barnes Cartwright, to sign over 200 books? You never know.....With some quirky and possibly sinister series book fans lurking about, this made for an enjoyable read--especially for a fan of such books who regularly runs conventions and "hob nobs" with other fans. I think you'll enjoy it as much as I did.

James and Kim Keeline and I were recognized in the afterward and my website even gets a mention in the story. How honored was I to have Charlie checking out my site, the Nancy Drew Sleuth website, for some research on Nancy Drew! That's quite fun, indeed. I highly recommend this read, it's a great cozy mystery and the historical information weaved in here and there on some of our favorite books and series was very enjoyable too.

Dean James, a seventh-generation Mississippian, is a librarian and Edgar-nominated author of over twenty works of fiction and nonfiction. His nonfiction has won both the Agatha Award and the prestigious Macavity Award. Writing as Miranda James, he is the New York Times bestselling author of the Cat in the Stacks series, featuring librarian Charlie Harris and his trusty rescue cat Diesel. He is also the author of The Trailer Park Mysteries, writing as Jimmie Ruth Evans and the Bridge Club Mysteries, writing as Honor Hartman. As Dean James, he’s authored The Deep South Mystery Series and The Simon Kirby-Jones Mysteries. He lives in Houston, Texas, with two cats and thousands of books.

See www.catinthestacks.com to discover even more!

Here's the list of books in the Cat in the Stacks series: 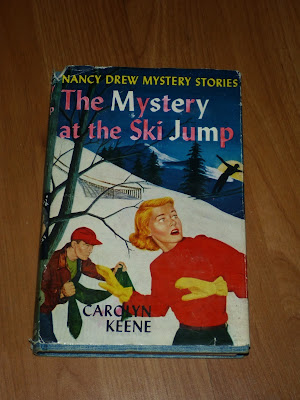 If we ignore the letters colored in red, it spells "Msey" - perhaps short for "misery" - the kind of misery in seeing this DJ colored on! ;-)

Nancy Drew Books & Collectibles to Sleuth for in 2014 
If you're wondering what's coming out for 2014 or when the annual Nancy Drew Convention is, check out the following books and collectible releases by month for 2014--this Blog will be updated from time to time with new information, so keep it bookmarked or find it under "2014 Nancy Drew Releases" in the Blog labels below right.

A few other items of note: Papercutz' Clue Crew graphic novels have been cancelled--so only 3 volumes were issued from 2012 to 2013 in this set.

Her Interactive Computer Games: Debut of Ghost of Thorton Hall for iPad. Android and Kindle Fire will soon follow.

Penguin/Grosset & Dunlap: Issuing Special Hardcover editions of the first 4 classic Nancy Drew books with new covers--available in addition to the regular editions of these titles.

Her Interactive Computer Game: (May or June?) The Shattered Medallion