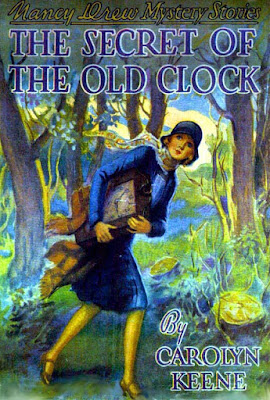 Smart. Sophisticated. Independent. Fashionable. Fearless. Role model. Nancy Drew is all of these and so much more--a timeless character that has trailblazed through generations of fans and over 8 decades since 1930.

It's no mystery why Supreme Court Justices, lawyers, detectives, librarians and teachers, authors--you name it--have been inspired and motivated by Nancy Drew.

No matter the baffling mystery, the suspenseful cliffhanger or the dastardly peril Nancy faced, she was always determined to solve a mystery and help others. Often racing off on adventures in her snappy roadster, she was always fashionably attired in the latest frocks and delectable heels--pure grace and gumption--an adrenaline thrill for the masses. Today's Greek yogurt and protein shake guzzling yoga pant-wearing memory foam tennis-shoed peeps don't having anything on Nancy Drew! 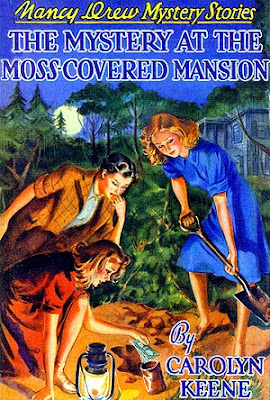 A classic and timeless sleuth, Nancy Drew has endured through time from her plucky out in the world style beginning in 1930 to a modern day latte-drinking heroine. She is a tried and true character–smart, resourceful, and independent. Nancy has many talents and is popular among her circle of friends and peers. There is no mystery too baffling that she cannot solve. What is the scoop on Nancy and her friends and family?

Let's walk down memory lane and unveil the mystery behind the intrepid girl sleuth.

What is the Scoop on Nancy Drew & her chums?

The basic formula for the Nancy Drew books is that the classics were "safe and sane" - and family friendly. They were not about politics or religion or other divisive topics. They were kids books, after all! They were designed to be fun, entertaining mysteries which were light on romance, full of suspense and cliffhangers and a healthy escape from the everyday ordinary lives of those reading the books. And they were educational to a degree - where you might learn more about the theme of the book or a place Nancy was visiting and sometimes words was used that a child might need to look up in a dictionary to learn more about. But overall, they were pure escapism and thrilling for kids. Nancy's desire to solve a mystery at all cost, no matter how baffling the case, to right wrongs and restore justice was a running theme throughout the series and that dedication was motivating and inspiring to kids who read these books. 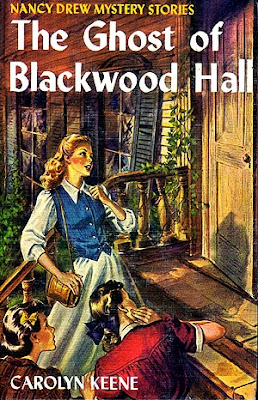 Nancy was 16, aged to 18 in later texts and revisions. She’s the daughter of famous mystery case attorney, Carson Drew. Carson is a former prosecutor and his good reputation is known far and wide and comes in handy during many of Nancy’s mysteries. Motherless since the early age of 3 (10 in early original texts), she is close to her father. Housekeeper, Hannah Gruen, more servant-like in early original texts, later became more motherly to Nancy in later texts and revisions and played a greater role in bringing up Nancy. The semi-affluent Drews live in fictional River Heights, USA in a nice neighborhood, their house set back some from the street. Nancy is no longer in school and spends most of her time and energy focused on her passion for solving mysteries.

Early on, she was accompanied by Helen Corning on adventures, but soon Helen was replaced by the classic foil characters, Bess Marvin and George Fayne. Bess and George are cousins and help Nancy solve her mysteries. Bess is boy crazy and likes to eat, forever on a diet. She is more timid and easily scared while involved in Nancy's cases. George is the tomboyish athletic foil, while Nancy falls in the middle. Nancy compliments them, keeping them grounded. Boyfriend Ned Nickerson is introduced earlier on than Bess and George’s dates, respectively, Dave Evans and Burt Eddelton, but all three are a staple of later texts and revised versions. Ned, Dave, and Burt attend nearby Emerson college and are quick to help out in solving a mystery. Ned is always there for Nancy, but knows her mysteries are a very important priority in her life and remains very patient. He plays football for Emerson College. Nancy’s dog Togo, shows up in volume 14, The Whispering Statue, and appears in volumes after that from time to time. A sometime pet, Nancy's cat, Snowball, appears in the original text of volume 17, The Mystery of the Brass-Bound Trunk. In early volumes, Nancy drives a blue roaster (with a few brief color variations). Later on, her transportation becomes a blue convertible and later is specified as a blue Mustang convertible. 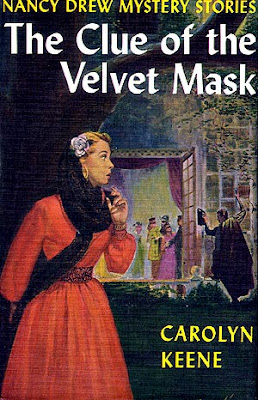 
What would one expect from a sleepy tree-lined suburban Midwestern town formed about the winding Muskoka River? A hotbed of criminal activity! From burglars (often at the Drew's home) to jewel thieves to smugglers, kidnappers, and organized crime syndicates, River Heights has it all. There is plenty of excitement for Nancy, whether she is eavesdropping on suspects at Taylor's Department Store, chasing criminals down city streets in hot pursuit of her just snatched purse, or visiting a friendly neighborhood baker or jeweler for a few clues. Life is clearly never a dull moment in Nancy's world.

Fictional, though it may be, many collectors and scholars have argued that a basis for River Heights may be found in Iowa, Ohio, Illinois and even New Jersey--home of famous "Carolyn Keene", Harriet Stratemeyer Adams. The Nancy Drew Files series and the Nancy Drew: Girl Detective series placed River Heights near Chicago, Illinois. 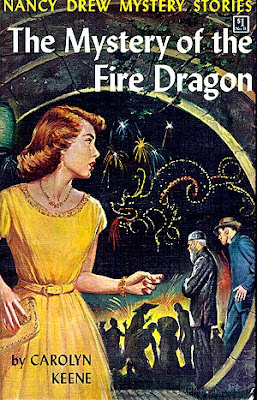 A Nancy Drew mystery just wouldn't be the same without the latest fashions or sleuthing snacks.

Fashionable Frocks are a staple of Nancy Drew's appeal. The latest fashions were depicted on many generations of Nancy Drew covers over the years by illustrators ranging from Russell H. Tandy to Bill Gillies to Rudi Nappi among others. A sophisticated darling in the 1930s in a golden bob and cloche hat is depicted on the cover of volume 1, The Secret of the Old Clock. 1950s Nancy reminds one of an young "June Cleaver" with matching handbag on the cover of volume 31, The Ringmaster's Secret. A Polyester-pantsuited Nancy is an emblem of the 1970s leisure suits on the third cover of volume 16, The Clue of the Tapping Heels. 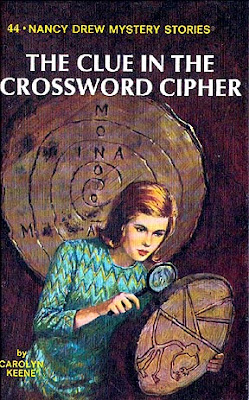 What color *is* Nancy’s hair?

In the early books, she is a blonde. Around 1957, the cover of volume 35, The Haunted Showboat came out and she was painted with more reddish hair and thereafter illustrator Rudy Nappi continued to paint her this way - there was more contrast on the Haunted Showboat cover since Bess was a blonde and George a brunette. Soon in the stories, she was referred to as being Titian-haired.  Does a blonde Nancy have more fun?!

What Happened to Nancy's Mom?

We don't know a lot about Nancy's mom in this series, however not having a mom allows Nancy the freedom to go out and do a lot of things most girls couldn't do! While she has a doting dad who does worry about her, he's often off on business trips and too busy to be a very demanding father.

We know from the originals that she was around 10 when her mom died but later that became 3 years old. Hannah Gruen is the "motherly" housekeeper who has stepped in to help rear Nancy, but she isn't so overly motherly that she smothers Nancy.

Mrs. Drew's illness is a mystery but was described in #39 The Clue of the Dancing Puppet as a sudden illness.

There are still personal effects such as a lace shawl and fan around the house that were her mother's and her mother's maiden name was Austin. She has maternal family in Scotland and her maternal great-grandmother Lady Douglas is involved in the mystery in #41, The Clue of the Whistling Bagpipes.

We often hear that Nancy looks like her father's sister Eloise, so it remains a mystery as to what Nancy's mother looked like. 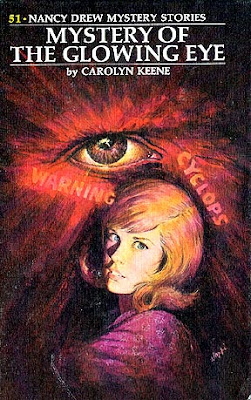 How Many Times Did Nancy get Knocked Unconscious, Locked Up, Kidnapped, and all those other villain foibles that nearly did her in?


Like the Energizer Bunny, she took a lot of licks but kept on ticking! Sometimes she suffered a few setbacks or went down for the count - but a wan smile and a healthy dose of pluck got her right back on her feet to tangle with the villains and save the day. Here's a few stats based on the classic 56 Nancy Drew Mystery Stories books:

I hope you enjoyed this brief look back at classic Nancy Drew and that you'll want to go grab a favorite mystery or two off your shelves and indulge in some nostalgia.

In the comments, let me know, what are some of your favorite characteristics about Nancy Drew and her chums and her mysterious world inside the books? If you had to pick one word to describe Nancy Drew, what would it be?
Posted by Jenn Fisher at 2:57 AM