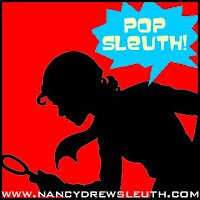 The Time Traveling Fashionista On Board the Titanic, the first book in the series by Bianca Turetsky, features a character, Louise, who likes Nancy Drew. She uses skills learned from Nancy Drew to pick the lock of a closet she gets trapped in.

Cartoonist and author Stephan Pastis (Pearls Before Swine) writes a book series called Timothy Failure, of which he noted, "I straight away knew I wanted to write a detective story but when I read Encyclopedia Brown and Nancy Drew and The Hardy Boys when I was younger, I always thought I must be the dumbest guy in the room because I never guessed it. Even now if I read Encyclopedia Brown I get about half of them! So I thought it would be funny to turn detective stories on their head and have Timmy starring in my books, a detective who truly cannot solve any mystery. He is way dumber than anyone else. And that made me laugh."

Ceane O'Hanlon-Lincoln has written a series of books , "The Sleuth Sisters" mystery series which she calls "Nancy Drew" for adults with "magic, adventure, suspense and surprise at the creak of every opening door and every page turn by the reader."

Actress Cate Blanchett says she wanted to be either Huckleberry Finn or Nancy Drew when she was a child.

Author Charlaine Harris was a Nancy Drew and Hardy Boys fan growing up.

Author Chelsea Cain (Confessions of a Teenage Sleuth, etc.) says of Nancy Drew, "I loved Nancy Drew books as a kid. I read them voraciously. For far too long. And, it ruined me for other kinds of books. Like my whole generation has this very special relationship with Judy Blume that I lacked completely. Because here's what you will never find in a Judy Blume book--no one ever gets chloroformed and put in the trunk of a car...I was never interested in real life. I wanted some sort of mystery or adventure."

NBC's Tamron Hall is a Nancy Drew fan--describing herself as a bookworm.