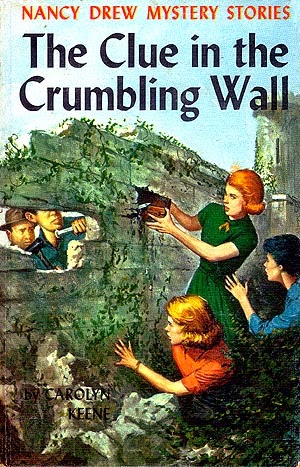 Benson, a native Iowan, received her degree in English (undergrad) at the University of Iowa in 1925 and then was the first person to receive the schools Masters degree in Journalism in 1927. 22 years ago, she was honored at the University of Iowa at the first ever Nancy Drew Conference in April 1993. Benson's Iowa heritage will be the focus of day one of the convention with a University Library event and donation of Nancy Drew books and a full set of Her Interactive's Nancy Drew Computer Games to the Iowa City Public Library.

Benson's writing - both her person writing and the books she ghosted on Stratemeyer Syndicate outlines like the Nancy Drew books - had the flavor of her native Iowa in some instances, particular the early Nancy Drew books from the 1930s and 1940s.

Much is made about River Heights, Nancy Drew's fictional home town--what I call "Anytown USA." Many fans over the years have seen some of their hometown as being possibly River Heights and then there are fans who prefer that it be based in their region of the country.

What was the intention for Nancy Drew from the beginning, however? When Edward Stratemeyer wrote that outline for The Secret of the Old Clock, it was intended to be the "Middle West." At the time, Stratemeyer couldn't have known that the series would last over 80 years and the location would seem to change overtime depending on who was authoring them. Ultimately, having River Heights be Anytown USA, gave fans the opportunity to feel like their own backyard might just be in River Heights and the ability to dream just a little bigger.

Fans who converge on Iowa this week, however, can envision themselves in River Heights during day two of the event when fans will travel to "River Heights" to see the Nancy Drew book, The Clue in the Crumbling Wall, come to life--for a day of touring, a clues challenge and a masquerade mystery party.
Posted by Jenn Fisher at 12:01 AM