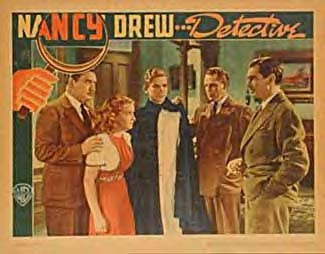 The first Nancy Drew movie to be produced, Nancy Drew...Detective in 1938 was loosely based on The Password to Larkspur Lane. Nancy Drew was played by Bonita Granville and Ned Nickerson became Ted Nickerson--played by Frankie Thomas. The movie played up some of the drama in the book and maid Effie was especially comical and dramatic--even causing Ted to tackle Nancy's father, Carson Drew, who was locked out of the house. Nancy and Ted thought he was a burglar snooping in the bushes. Effie had barricaded the door shut with furniture.

In the movie, Nancy gets Ted too pool their (mostly his) money to rent a plane so she can take aerial photographs of the area in order to locate the "nursing home" that the missing Mrs. Eldridge is being held at. Instead of Helen in the book version, it is Ted who dresses up as a nurse to help Nancy gain entrance into the mysterious place--dressing in drag for comedy. And Nancy fires a gun like a crazy woman in the end before passing out.

Nancy was much more ditzy in the movie than in the book, but these movies were campy and fun aside from that, so you have to take them for what they are.

Some books advertised the movie with this wrapper seen below: 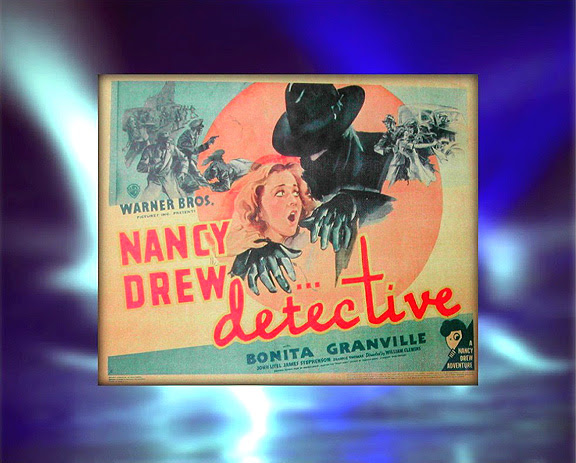