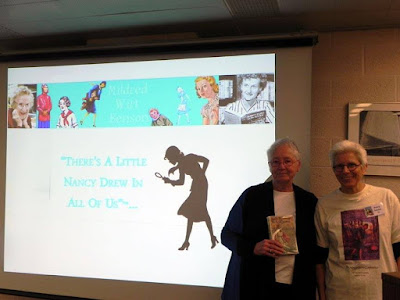 The world is a much less richer place today, with the loss of someone beloved in our community, former Univ. of Iowa Journalism Professor, Carolyn Stewart Dyer. I am so sad to share this news. But I want to say a few things about Carolyn, who was friend and mentor in my journey to write and write about Mildred "Millie" Wirt Benson. I first became aware of Carolyn and the amazing Nancy Drew Conference that took place in Iowa City, IA back in the late 1990s. I had missed out on the 1993 conference, but I was so happy to hear about it and get Carolyn and Nancy Romalov's book, Rediscovering Nancy Drew, so I could read all about it. And I enjoyed the book and hearing all the memories from other fans who had attended. 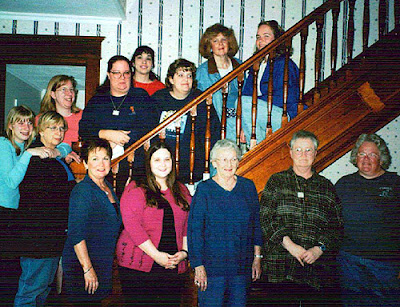 For those of you new to the never ending series and celebration that is Nancy Drew, it was discovered back several years before the conference, that one of their famous alumni had written Nancy Drew books when staff were going through alumni files. Years before, Millie had corresponded with the university about her writing, they had been putting together a list of all her books and acquiring them for their collection. And not only was she famous for that small aspect of her life, she was also the first person to graduate with a Masters in Journalism in 1927, so they wanted to recognize her and out of that grew the idea to host a conference. It's all chronicled in Rediscovering Nancy Drew, and I recommend it highly to everyone who hasn't read it.  And if you have read it,  pick it up again and refresh, because it was this conference that really put Millie on the nationwide radar as having been the first Carolyn Keene. She wasn't the only one recognized there, it was all about Nancy Drew and her history and Simon & Schuster even had one of the modern "Carolyn Keenes" there for a day to talk about ghosting the series. Many aspects of Nancy Drew from fan based to academic were all touched on.

At the time, it became such a phenomenon that I don't think anyone at first in the planning, even Carolyn, realized what it would snowball into. Over 500 attended from all over, the news media covered it from far and wide and even ABC recognized Millie as their person of the week. It was overwhelming to all,  but in a good way, for so many women and men had so many stories to tell about how Nancy Drew had influenced them and made their lives better. So  many fans, collectors and enthusiasts came together thanks to Carolyn and Nancy and all those who worked hard to make the conference a success. We were all better for it and it's such a legacy for Carolyn, among a lifelong career in journalism, teaching and writing that Carolyn will always be remembered for. 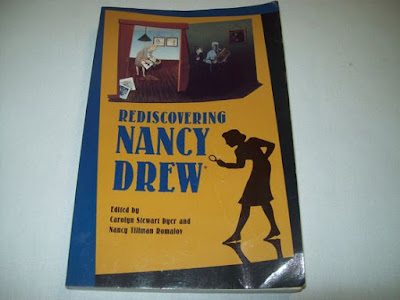 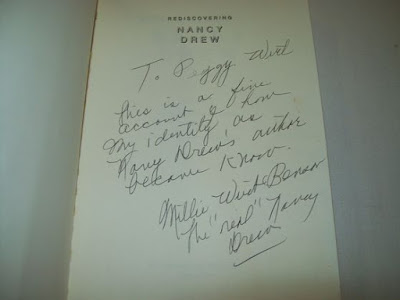 After meeting Millie in person in 2001 when she was in her 90s still working at the Toledo Blade on a weekly column, it was inspiring. Our online discussion group, Nancy Drew Sleuths, decided that each year we'd get together and we wanted to go to Iowa the next year to see Millie's childhood home and research at the Iowa Women's Archive where Millie had donated a lot of her papers. We also wanted to meet Carolyn and Nancy and they were both so gracious to host us along with Kären Mason, curator of the archive. We held a small event at the university and several of us gave presentations, Nancy and Carolyn included. We enjoyed hearing their memories of the event and how it all came to be. It was wonderful to meet them both.

Soon after, Millie passed away and I was asked to write an OP-Ed about Millie. Carolyn stepped in to help me with it and give me advice. I always appreciated that. Over the years on numerous visits to research in Iowa and future convention events we held there, she and her partner Wendy were always there for me and always encouraging. Dinners and catching up were something I always looked forward to. Traveling around with her to Ladora and surrounding areas to research was always an adventure. It has meant a lot to me over the years. I feel such a loss today as does everyone who got to know Carolyn.