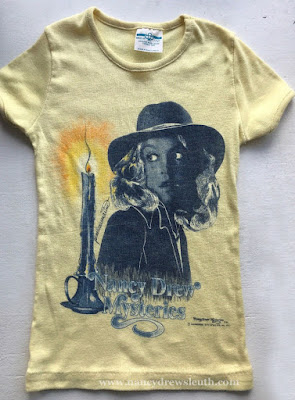 
I present to you the first shirt above - the Sears, Roebuck and Co 1970s Pamela Sue Martin T-Shirt. It's snazzy yellow and features an illustration of 1970s Nancy Drew TV show actress Pamela Sue Martin as Nancy Drew sporting a hat next to a candle. I acquired this shirt last year on eBay. I've been on eBay since around 1997 and have never seen this shirt sold in 23 years other than last year's auction. It's incredibly scarce.


So scarce, I didn't even know it existed.


In fact I'd been on the hunt at the time I found this one for 22 years looking for ANOTHER Nancy Drew t-shirt that I've never seen. A real phantom! Or so I thought until this weekend. That mystery is now solved, though I don't have it in my hot little hands...yet! If anyone out there has the Pamela Sue Martin photo t-shirt where she's in the little tank top (see below for clues), please e-mail me at my website - nancydrewsleuth@aol.com 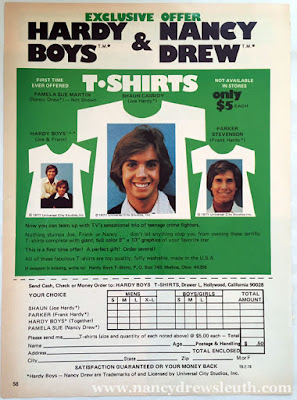 I'd been looking for the phantom-like Nancy Drew Fan Club t-shirt that isn't pictured in the ad above, but was for sale in the 1970s as part of the Nancy Drew and Hardy Boys Fan Clubs. In all the ads I'd acquired, the shirt was never pictured, however I knew it existed for several reasons. The first, is that in the ads, you could send away for it as well as the Hardy Boys shirts pictured. Secondly, in the New York Public Library's Stratemeyer Syndicate archives, there exists correspondence from the Syndicate's owner, Harriet Stratemeyer Adams, to the company selling the shirts stating her displeasure at the image of Nancy Drew which she didn't approve of. She felt it was more about Pamela than Nancy Drew and not appropriate. I could never imagine why she didn't like it, but she was very strict about Nancy Drew's image.

So, when I saw the above yellow t-shirt from Sears on eBay - I didn't realize it was a Sears shirt at the time - I just assumed it was a Eureka moment and I'd found the one I was looking for all those years. After I got it, I realized that it was not the shirt I had hoped for, but it was a Sears, Roebuck and Co shirt as noted on the tag. Sears also sold Hardy Boys and Shaun Cassidy clothing in the 1970s, so it makes sense they had some for Nancy Drew. I don't know if they had anything besides this shirt or not, but it will be interesting to see if anything else surfaces in the future!

However you won't find it in a Sears Catalog. I did some late night sleuthing online at several sites that have scanned Sears catalogs and searched all the 1977 and 1978 and even 1979 catalogs - the only clothing to appear in those was some Shaun Cassidy jeans and a satin jacket and some shirts with his face more related to him and not the Hardy Boys. No Nancy Drew or Hardy Boys shirts. However, a Google search found four Hardy Boys t-shirts that were part of the Sears line--I'll add them below at the end of this blog posting. Two feature both of the Hardy Boys, Parker Stevenson and Shaun and two feature just Shaun. They are all the same style and texture as the Nancy Drew shirt and one of the Hardy Boys shirts you'll see has a similar tag to the yellow Nancy Drew shirt. Could there be a second Nancy Drew t-shirt? My guess is no, because there was often far more Hardy Boys 1970s merchandise than Nancy Drew as it seems the teenage girls were more into the boys! But, I'd certainly love for another to surface! Since they were not sold in the catalogs, they must have been only sold in stores and it's possible only in certain stores which could explain their scarcity too in addition to being clothes which become disposable over time unless you're a collector. 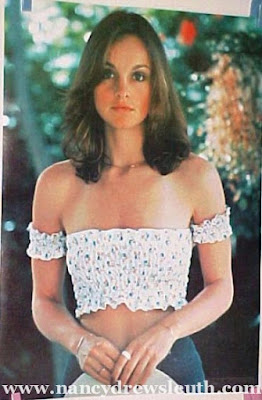 Back to the really seriously phantom 1970s t-shirt. I collect a lot of 1970s Nancy Drew and Hardy Boys TV show collectibles as part of my Nancy Drew collection. In fact I have a Pinterest board dedicated to these collectibles you'll find of interest. There are over 100 items on the board and it's always growing. I started noticing something that I should have noticed ages ago! I could have solved this mystery sooner. From the same fan club company, I had purchased the above Pamela Sue Martin poster of Pamela dressed in a little off the shoulder tank top. It wasn't very Nancy Drew-ish, but it was used for a fan club image - and the poster features the Nancy Drew show name and copyright info. 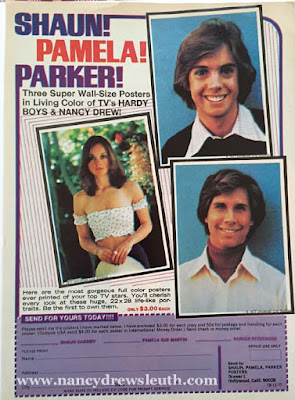 I also managed to collect the ad shown above which featured this same poster for sale as well as two Hardy Boys posters that one could order. I thought that was so cool as I like to collect the behind the scenes ephemera to the merchandise items as well. It all tells a story. However for some reason, I had never paid attention to the fact that the two posters of the Hardy Boys are the SAME images used on the Hardy Boys t-shirts from the SAME fan club - the address on both the t-shirt and poster ads to send off for these things is the same as well. So another Eureka moment was when I realized that the little tank top Pamela Sue image was likely the same image used on the t-shirt! And that image would have definitely upset Harriet. 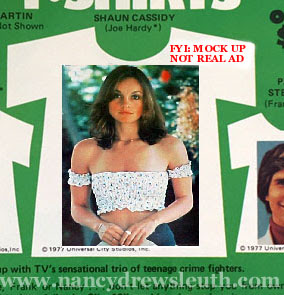 All the puzzle pieces fell into place. Still circumstantial, but logical. And this weekend the final puzzle piece was found. Two members of our Nancy Drew Sleuths group happened to own this Nancy Drew fan club t-shirt with tank top Pamela on it back in the 1970s when they joined the club! So I created the above image of what the shirt possibly looked like, but it's just a mock up. I just placed the Pamela image over one of the Hardy Boys. It's possible the image is smaller on the actual shirt, but the point is that the t-shirt would feature this image. So, be on the lookout for it at those garage sales, tag sales, thrift stores, antique malls, flea markets and your mom or grandma's closets and see if you can find one. And if you do, and are willing to part with it, I and the Toledo Public Library, which now houses my extensive Nancy Drew Collection on display, would really appreciate it! If you happen to have a photo of it or of yourself back in the day wearing it, a photo would be great to see as well.

I love sleuthing for clues much like Nancy Drew. The hunt might not take me down dark alleys to tangle with sinister suspects, more like late night computer research in my comfy PJs, but it's still a thrill to solve a mystery that has baffled fans for so long. What went from a long-time search for a phantom t-shirt led to two t-shirts and the discovery of what the still-searched-for phantom t-shirt has looked like all this time. I may never find the actual t-shirt, but for a researcher or historian of something like Nancy Drew, this is a very exciting moment in the great puzzle that is the world of Nancy Drew. 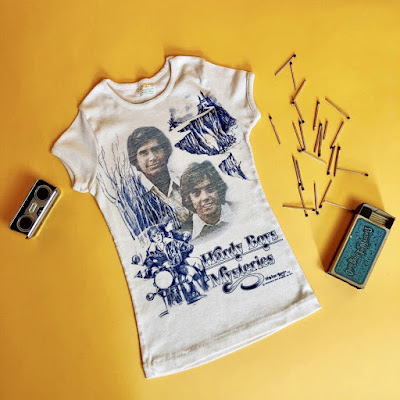 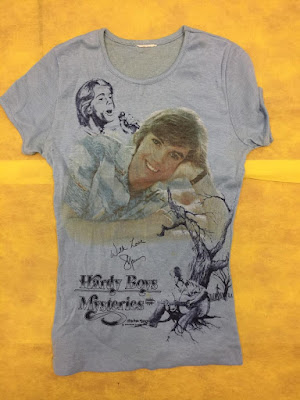 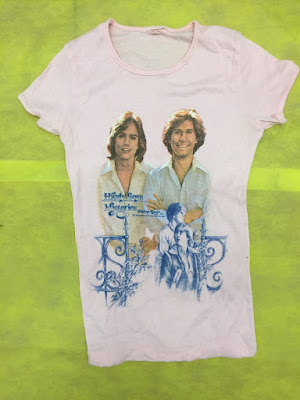 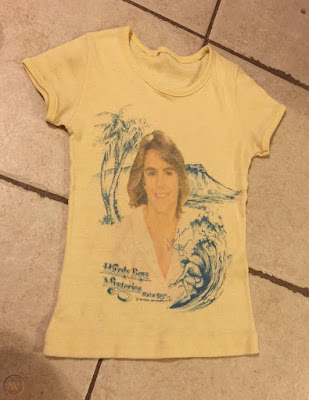