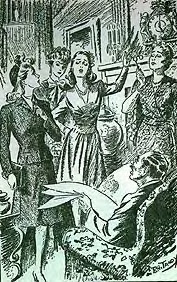 Richard, Cora and snooty spoiled children Ada and Isabel Tophams were Nancy’s first adversaries. Skinflint Richard and his social climbing wife Cora scheme to get Josiah Crowley to write a will in their favor in The Secret of the Old Clock. Ada laments about Nancy, “She always did have a way of nosing into things she had no business to find out!”

We learned Nancy Drew had 2 rivals or enemies--the Topham sisters. She gets back at them when Ada breaks a bowl in a department store and she certainly works (especially more so in the original version) at bringing them down a peg or two throughout the story. Of course, the Tophams come across so miserably not only in their characterization and Nancy's opinion of them but in their actions like the bowl incident, the dress shopping incident, and their comments in the park that Nancy overhears, so we feel they deserve it!
Posted by Jenn Fisher at 9:57 PM