Sold in the last couple weeks on eBay were 2 each of #1 The Secret of the Old Clock and #2 The Hidden Staircase--in addition to the other recent firsts of #3, #5, and #6 (see this Blog entry for details.)

How often in the past 13 years of eBay Nancy Drew auction history that I've been around, have two first printing Nancy Drew books shown up at nearly the same time? And of the first two books? 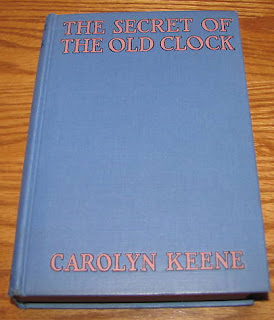 So it was with extreme interest that I watched these auctions to see how these books would do at eBay, especially listed so close together. After all, in the past Old Clock has sold for over $10,000.00 in each auction and the last one over $11,000.00. In the past, most of the books auctioned were in pretty good shape for first printings. Of the recent auctions this past couple weeks, 1 was in good shape and the other not so much :(

Clearly the books are starting to come out of the woodwork and I hope to see more. What will this do to the value? Likely drive the prices down somewhat as has been seen with the recent ending prices--of course we do have to factor in the economy and the fact that eBay has been a buyer's market for quite some time. Another thing that has driven some collectors away from that forum has been the circular reseller's market at eBay--a clique of resellers who run up prices to buy books and then resell in the same market. Many disapprove of that and won't bid on those books. 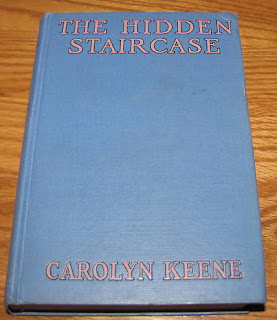 Pictured in this Blog posting are the good condition Old Clock and Hidden Staircase books that sold for $7257.98 and $6233.00 respectively. The shape was very nice over all and worth the prices. In fact the buyer got a good deal on these considering past auctions. Hidden Staircase did sell a bit higher than I expected though.

One thing that is a minor irritant to major irritant depending on who you talk to, is that when these books get listed on eBay this seems to be the typical pattern:

1. Book gets listed, seller typically doesn't know what they have or how much it could be worth.

2. Several collectors contact the seller trying to get them to end the auction and sell to them for a lowball figure. Sometimes sellers do, but many times they let the auction run.

3. At the same time, some collectors run to e-mail the seller to beg them not to end the listing or accept any offers as the auction will sell well and high for the seller.

4. Then you typically have some people for whatever motive they have, who e-mail the seller gushing and singing the praises of the book and declaring that it's worth at least $10,000.00 and the seller should be so THRILLED that they are going to make a mint basically. Collectors get very irritated by these kinds of "friendly helpers" - as it's not like we're all millionaires out here, sometimes it's nice to get a bargain, especially when this kind of books sells so high to begin with!

5. And then there are those who post at a public forum or group who say, guess, what did you see that first printing of Old Clock listed at eBay!?? I can feel a subset of collectors collectively groan when that happens as typically everyone hopes that no one else has seen an auction they are planning to bid on! :)

6. And then typically the bidding doesn't jump up a lot (other than newbie bidders who live and learn after putting in bids and bidding a lot in the beginning) until the last couple days and then of course that last minute of the auction when it goes crazy! That's what's fun to watch.

Oh the drama! I tend to be mildly amused by it, as I usually am not even in the running to bid on expensive books like this so I sit back and enjoy the ending and see how it does. It's nice to see them coming available--I suppose kids who had these back in 1930 who may have been born around 1917 to 1920+ would now be in their late 80s to 90s and so these may be coming out of estates--let's keep our eye out and maybe more will show up soon!

I do think more will show up. As someone mentioned tonight in the Sleuths group, there are likely more than 10 surviving copies of the first printing dust jackets of #1, 2, and 3. I have long believed that more of them are out there, waiting for us to find them. I dream of walking into an antique shop and finding the first printing Old Clock book and jacket for $10 to $100 or similar. It's a nice dream.

My #1 collecting goal is to own all of the first printing books and jackets in the Nancy Drew series. I am getting very close!

Yeah like the buy it now of 100.00 on the first Old Clock that Sarah got a few years ago at eBay and then resold for big bucks. Love to see that sometime again :)